Mammoth Football! Caption This May 2022

For the month of May, ROAAr’s monthly “Caption This” series put the spotlight on an intriguing photo of people playing a mysterious sport on campus, taken circa 1890.1 A crowd of spectators can be seen looking on as players huddle around a giant inflated ball, presumably trying to catch it. The photo is catalogued as “Mammoth football game on McGill campus” in the university’s database, but we did not have any luck finding other records of this particular sport in the archives or on the internet. Something we did notice, however, are the eye-catching striped socks donned by certain players. Turns out, they were a staple component of McGill’s football and rugby teams’ uniforms at the time. While this observation raised more questions than answers, I think it is one worth sharing.

In the absence of context and background information, Caption This participants devised original and humorous captions with references to not only sports, but also to iconic Montreal restaurant culture and sci-fi British sci-fi television.

For starters, on Twitter, McGill University’s official account and user C. de Saint-Rome came up with ones that cheekily highlight the fact that this “mammoth” version of football, much like the striped socks, failed to catch on unlike other sports pioneered by the institution:

@mcgillu “McGill has played a key role in the creation of three pillars of sport: Football, hockey and basketball. This one? Not so much.”

Myriam Audrey Larose proposed a fairly interesting counter theory in her caption, suggesting that the sport might be a predecessor to Kin-Ball:

Kin-Ball was invented in Quebec in 1987 by Mario Demers, a physical education teacher. The game is played among three teams of four, each corresponding to a different colour, with a four feet long inflatable ball. When a team’s color is called by the hitting team, it must catch the ball before it hits the ground. Points are given to two teams when the other commits a fault. The sport has been growing in popularity and is played in over 30 countries, being especially popular in Europe.

Despite their apparent similarities, Kin-ball is not actually a derivation of mammoth football. In an interview with UQAM, Demers explains that a huge balloon he saw at Festival d’été de Québec served as the inspiration behind the sport. He originally created it to counter the exclusionary nature of competitive sports and ensure enjoyment and collaboration between students with varying levels of athletic aptitude.

“The Birth of Orange Julep.”

For those unfamiliar, Gibeau Orange Julep, or “Big Orange”, is a fastfood restaurant in Montreal, famous for its delicious orange drink, the Orange Julep. Built in 1964 to look like a giant orange, the infrastructure doubles as a popular roadside attraction and has become known as an iconic piece of mimetic architecture. In fact, it was even featured in Quebec boyband Men Without Hats’ song “Where Do The Boys Go”

The eccentric ball reminded others of “Rover,” a villainous white balloon from the 1968 British show “The Prisoner,” created and acted in by Patrick McGoohan.

Anyone who watched The Prisoner television show knows this is the prototype of “Rover”, used to keep students in line when they strayed from the campus…

“There’s ‘ROVER’! Patrick  McGoohan must be in that mob!”

The fictional series follows people being held captive in an isolated “village” that is heavily guarded. Rover was a big-brother-like entity, punishing anyone who attempted to escape. It was flexible and strong, depicted as being able to suffocate and even devour people. If the villagers ever united against it for revenge, I imagine that the scene might have looked something like this:

References to famous plot devices did not end there. Steve Leclair drew parallels between the ball and the powerful and sought-after One Ring from the “Lord of the Rings” book/film series in his caption:

Numerous characters in possession of the ring refer to it as “My Precious,” namely Gollum, a narcissistic creature who is drawn to its limitless power. A game of “mammoth ring” between him and early 20th-century McGill students would undoubtedly be an unforgettable one. 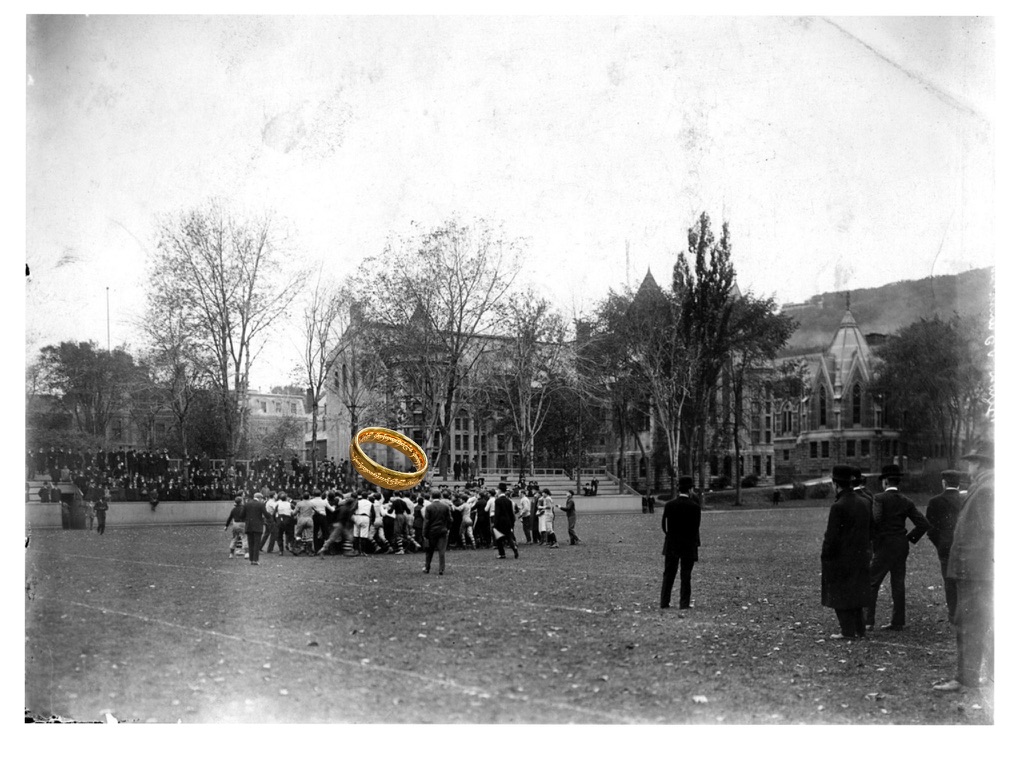 Thanks to all who captioned this photo. While we didn’t find more details on the mammoth football tradition, this month proved an interesting dive into alternative history!