Toasting Judy Kolonics and John Cunningham on their retirement 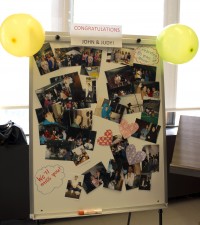 On Thursday, May 5, 2016, the McGill Library came together to toast Judy Kolonics and John Cunningham as they prepare to kick up their feet and head into well-earned and restful retirement. Throughout their more than 80 years of combined experience, Judy and John have been integral and generous parts of the Library family, helping generations of McGill students find their way.

We have compiled the retirement speeches delivered by two of their colleagues and by Judy herself at the celebration to pay homage to the enduring impact both Judy and John have had on the Library.

All the best to Judy and John!

When Judy graduated from high School in 1970 she was hired by Bell Telephone. Back then Bell expected it employees to be dignified and polite, to undertake assigned tasks without question or complaint, and to show extreme respect for supervisory authority. What were they thinking? Not a marriage made in Heaven and it didn’t last. 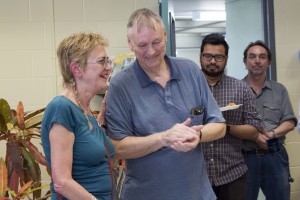 In 1973 Judy came to McGill as a kardex clerk in the Government Documents Department, with the dizzy rank of LA2. Over the next 20 years her responsibilities and rank increased until the arrival of automation, which changed all our lives. It was decided that Judy, now cataloguing and entering continuations in the database, should move to Library Technical Services. Back then the administration tried to keep employees fully informed but, before email and websites, they used a newsletter.

The 1992 article on Judy’s transfer said in part:

“Judy was among the first library staff to deal with electronic documents, and she helped shape cataloguing policies and procedures in this area. We are very happy that Judy now becomes a fully-fledged member of LTS and we welcome her!”

They also gave her a new title—get this—Electronic Resources Metadata Management Assistant. From 1996-2002 she split her time between Gov docs on public service duties and tech services. Finally she moved permanently to Tech services for the rest of her career.

Where do I come into this, who never worked with her? Well, back in the day we used to socialize a bit more. We had convivial parties at work and outside. Within the University MUNASA—this was before the union—organized a mixed softball league. Teams from across the University would enjoy as little recreational activity and then get to know one another in some local bar. At some point Judy decided to join the team. Softball requires a few basic skills—to hit, to run, to catch and to throw. In demonstrating these skills Judy was, to put it briefly, indescribably bad. However, in the bar afterwards, she was an unquestioned star. I’m not sure where she met her future husband J.C., but the relationship certainly blossomed in the après softball. We had several such relationships, but this was the most successful. I will say no more about those wild nights of long ago for two reasons. First I have always been known for my incredible discretion and second I’m not sure when the statute of limitations runs out. Suffice it to say Judy and I were teammates and teammates stick together.

Then, before we realized it, the whole 43 years had passed and Judy is retiring. Retirement is great. You wake up in the morning, think briefly about all the things you don’t have to do and go back to sleep. Unless your partner wakes up and tells you all the things you do have to do. I am sure everyone here joins me in wishing Judy the very best in this next stage of her life. Good luck, Judy.

“The time has come,” the Walrus said,

“To talk of many things:

And why the sea is boiling hot–

And whether pigs have wings.”

Through the Looking-Glass and What Alice Found There (1872)

I did not want this rather large event. I’m more of a “fly under the radar” type of gal. Thank you all for taking the time out to say good-bye.

Over 43 years ago, I applied for a job as a shelver/kardex clerk in the then Government Documents Dept. I thought that job would simply be a stop-gap and I would move on. That didn’t happen. 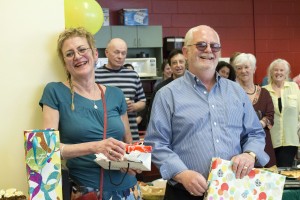 Back then, there was a true spirit of collegiality at the University. Professors, programmers, librarians and non-academic staff joined together to play softball on McGill’s “Field of Dreams” – the upper field near the observatory. There was no divide. After the game, we headed down to Henri Richard’s tavern to eat, drink, rehash the game and play “tibbets.”

For many, we began a network through softball and copious amounts of alcohol that has stood the test of time.

I met the love of my life on that Field of Dreams.

I’ve had the most fortunate time at McGill in working for and with some marvelous bosses. Some are no longer with us: Catherine Kollar (who hired me), Christiane Yassa (who was my direct supervisor) for 30 years. Others have moved on to different positions, provinces, career advancement or retirement: Phyllis Rudin, Joan Hobbins, Lynne Murphy, Chris Oliver, Joanna Andrews, Lise Hacket. Recently I’ve had the pleasure to work with Dawn McKinnon (so very bright, quick to learn and honest). I am leaving with having worked with Andrew Senior, whose kindness, wit and intelligence seem to me to be boundless.

All these people have many things in common: they treated me fairly, they listened, they encouraged my intellectual growth, they trained me properly, they gave me autonomy and they trusted me to do the job properly. They were all available to answer all my questions.

I have been so very lucky to have met these marvelous mentors. I will miss all those close to me; those people who truly know me. It is time for the young ones to soar.

It is time for me to say adieu.

I know John would have wanted a speech that is short and not too sweet. Well….tough teddy, tootsie!

John has been with us for longer than I would like to remember, but I do remember our first encounter, although he was too busy to notice. It was many years ago… when has courting Judy. 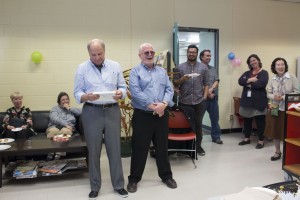 I was working at the McLennan Reference desk, which was in the central area behind the first floor elevators, now occupied by student study space, and I was in the midst of answering a reference question that required consultation of a Bible. On my way over to that section of the collection I stopped short when I identified John and Judy in humid embrace in front of the Bible collection. I hastily retreated to the Reference Desk and waited about 30 minutes for the climate to cool.

Since then I have had recent occasion to work at close quarters with John…. admittedly not as close as Judy. However, in this brief but eventful time I have come to notice and appreciate that John is unfailingly supportive of his colleagues, and has a naturally friendly and laid back disposition that has endeared him to all who work within his compass.

He has served and become acquainted with thousands of Library borrowers: students, faculty, Friends of the Library, visiting mothers, fathers, siblings, people who have lost their way, people trying to find their way, looking for a classroom, looking for a book or simply looking for trouble.

He has met them all – the enthusiastic first year students, the tired second year, the exhausted third year, the anxious-to-escape fourth year students and the know-it-all graduates.

He has encountered the smiling, the sad, the depressed, the obnoxious, the sleep-deprived, the angry and the students in tears.

And all have been treated to the same John: mellow, genial, responsive, empathetic, knowledgeable, and efficient.

And even if, after leaving the Desk he can be heard to mutter “stupid monkeys,” it is born out of sorrow and pity, not malice.

Throughout, John has maintained his sanity and his sense of humour and readily surrenders to a compulsive desire to suddenly burst into song.

If you are unfortunate enough to have a neighboring cubicle or an open-door office in his vicinity, you will be tortured by the duets of John and Franco bellowing a lounge singer’s standard or a Motown tune. On the other hand you may be fortunate enough to thrill to the soothing duets of John and me as we struggle to remember more than the first line of any of Casey Kassim’s top 40.

So, Johnny, my boy, time waits for no one, and you have now made a claim to some of it.

Just think, you will soon be able to

And just think, you will no longer have to tape The View or Judge Judy.

And the hundreds of times you were out there on the balcony placidly having a smoke and wondering… do cats really land on their feet….?

And Johnny, after your last working day, I promise you:

We will build a wall around that cubicle and the Library will pay for it!

So, we wish John and Judy a good and pleasant journey… calm seas, safe passage, the bounty of good food and drink along the way and… maybe the answer to “WHAT IS IT”. 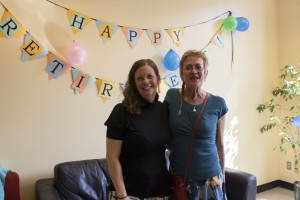 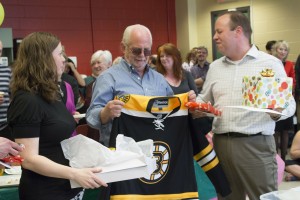 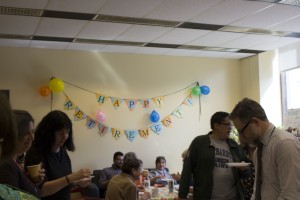 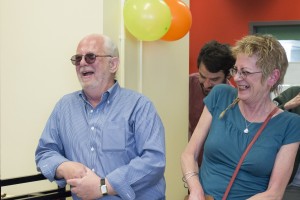 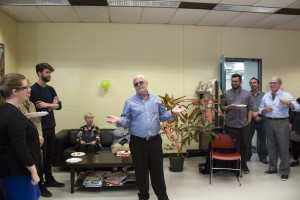 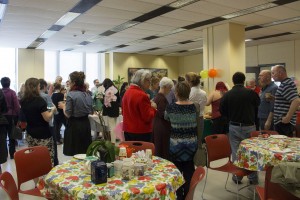