On May 1, 2016, we celebrated the two-year anniversary of the smoke-free policy for the McLennan-Redpath terrace, a pioneering initiative to create a healthier, cleaner learning environment for McGill students.

Implemented with campus-wide support at the student, faculty and administration levels, the initiative designated the terrace and stairs as a completely smoke-free area. A pair of designated smoking zones were established at the western and northern ends of the terrace to accommodate the displaced smokers.

Over the last two years, we have worked to improve the no-smoking signage throughout the terrace and launched numerous awareness campaigns, especially during the busy times of the academic calendar (such as the start of the fall and winter terms). The results have been encouraging–smoking has greatly diminished as more and more smokers learn about and respect the policy.

The terrace is now safer and cleaner, but we realize the project isn’t finished.

Despite the signs and awareness campaigns, there are still some individuals who choose to smoke on the terrace, particularly in the corridor stretching underneath the Redpath bridge. The side effects from their actions have slew of negative side effects on members of the McGill community who pass by and the issue is frequently mentioned in our feedback initiatives, such as the LibQUAL+ survey. 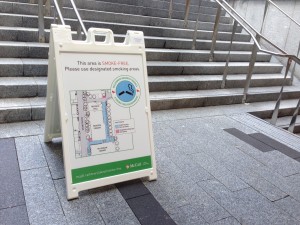 “Smoking affects not only the smoker but everybody else in the vicinity, as well,” said Trenholme Dean of Libraries Colleen Cook. “One of the major concerns we hear from students and faculty is them having to make their way through clouds of second-hand smoke to enter the McLennan Library Building. Even after the smokers have left, the cigarette butts that are left strewn behind litter the stone passageway and steps and create an eyesore for other passersby and additional work for McGill maintenance staff.”

We are fully committed to the smoke-free terrace and its benefits for the entire McGill community, but the reality is that it is impossible for Library or University staff to ensure the zones are respected 24/7. McGill security isn’t mandated to enforce the smoke-free rules, and we don’t have the staff or resources to constantly police the terrace. Still, we ask all of our staff to respectfully approach any individuals they notice smoking on the terrace and politely ask them to move to one of the designated smoking zones. We are also continually striving to improve our awareness efforts to ensure students, both new and returning, are informed about the rules.

Ultimately, however, the issue requires a cultural change from the entire campus as a whole and we ask the entire community–both smokers and non-smokers–to help ensure the terrace remains a healthy, clean smoke-free location. If you notice individuals smoking, please politely ask them to move to one of the designated smoking areas; we have found that the vast majority of people are willing to do so as long as they are spoken to courteously and openly.

Smoking on campus is an issue that is continuing to evolve and we are committed to ensuring the McLennan-Redpath terrace remains a safe, healthy and clean location that can be enjoyed by smokers and non-smokers alike.