Stephen Leacock’s “The Need for Dormitories at McGill” (1920)

Just in time for Parents Tent and Residence Move-in Weekend, enjoy this short piece entitled “The Need for Dormitories at McGill” by Stephen Leacock (1869-1944), comedic writer, lecturer, and professor in McGill’s Department of Economics and Political Science.

Reprinted from “McGill Students’ Residences” issued by the Publicity Committee of the McGill Centennial Endowment Campaign, 1920. Document held by McGill University Archives. Find it online along with other related materials in Fontanus’s Stephen Leacock Issue Vol 7 (1994). 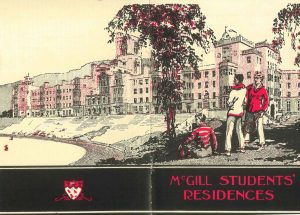 When I was a student at the University of Toronto thirty years ago, I lived, from start to finish, – in seventeen different boarding houses. As far as I am aware these houses have not, or not yet, been marked with tablets. But they are all still to be found in the vicinity of McCaul and Darcy, and St. Patrick Streets. Anyone who doubts the truth of what I have to say may go and look at them.

I was not alone in the nomadic life that I led. There were hundreds of us drifting about in this fashion from one melancholy habitation to another. We lived as a rule two or three to a house, sometimes alone. We dined in the basement. We always had beef, done up in some way after it was dead, and there were always soda biscuits on the table. They used to have a brand of soda biscuits in those days in the Toronto boarding houses that I have not seen since. They were better than Dog biscuits but with not so much snap. My contemporaries will all remember them. A great many of the leading barristers and professional men of Toronto were fed on them.

In the life we led we had practically no opportunities for association on a large scale, no common rooms, no reading rooms, nothing. We never saw the magazines, – personally I didn’t even know the names of them. The only interchange of ideas we ever got was by going over to the Caer Howell Hotel on University Avenue and interchanging them there.

I mention these melancholy details not for their own sake but merely to emphasize the point that when I speak of students’ dormitories, and the larger life which they offer, I speak of what I know.

If we had had at Toronto, when I was a student, the kind of dormitories and dormitory life that they have at Harvard, I don’t think I would ever have graduated. I’d have been there still.

The trouble is that the Universities on our Continent are only just waking up to the idea of what a University should mean. They were, very largely, instituted and organized with the idea that a university was a place were young men were sent to absorb the contents of books and to listen to lectures in the classrooms. The student was pictured as a pallid creature, burning what was called the “midnight oil, ” his wan face bent over his desk. If you wanted to do something for him you gave him a book: if you wanted to do something really large on his behalf you gave him a whole basketful of them. If you wanted to go still further and be a real benefactor to the College at large, you endowed a competitive scholarship and set two or more pallid students working themselves to death to get it.

That, as I see it, was about the idea and theory of the Canadian Universities as they used to be. In the course of time and through the plain teaching of circumstances, we have been getting away from that idea. We are beginning to see that the text book and the class room are but a part of the student’s life. If they are taken by themselves, in undiluted doses, they probably do more harm than good. They not only injure the student’s health but they impair his mind. True education cannot be achieved after this fashion, by shovelling in information. The most that this can ever give is erudition and pedantry, never capacity and genuine acquirement. The typical product of it is the college pedant possessed of a stomach-full of fact but with a mind the size of a peanut and the outlook of a child.

The real process of education consists (as the derivation of the word implies) in bringing out of the mind the inborn capacity that is in it. I think that Horace said something of this sort before. But there is no harm in saying it over again.

Since the melancholy days of which I speak, I have had the experience of nearly a quarter of a century of post graduate work and of university teaching. It is a noble profession, and, with the continued aid of the Governors of McGill University, I hope to have another quarter of a century of it at least before I hang up my mortar board and sink into the arms of the trustees of the Carnegie Pension Fund. But as a college teacher I have long since realized that the most that the teacher, as such, can do for the student is a very limited matter. The real thing for the student is the life and environment that surrounds him. All that he really learns he learns, in a sense, by the active operation of his own intellect and not as the passive recipient of lectures. And for this active operation what he needs most is the continued and intimate contact with his fellows. Students must live together and eat together, talk and smoke together. Experience shows that that is how their minds really grow. And they must live together in a rational and comfortable way. They must eat in a big dining room or hall, with oak beams across the ceiling, and with stained glass in the windows and with a shield or tablet here and there upon the wall, to remind them between times of the men who went before them and left a name worthy of the memory of the college. If a student is to get from his College what it ought to give him, a college dormitory with the life in common that it brings, is his absolute right. A university that fails to give it to him is cheating him.

If I were founding a University, and I say it with all the seriousness of which I am capable (just think of that!), – I would found first a smoking room; then when I had a little more money in hand I would found a dormitory; then after that, or more properly with that, a decent reading room and a library. After that, if I still had money over that I couldn’t use, I would hire a professor and get some text books.

We are conducting a campaign, – just now to raise, or lift five million dollars for McGill University. I have a notion that we are going to get it. And it is the duty of those of us who are in the University to show to our generous friends outside what it is that we mean to do with it when we have it.