By Margaret Blandford and Greg Houston

In celebration of the 375th anniversary of Montreal, McGill Library’s Collection Services is showcasing digitized Montreal rare maps held by the library’s Rare Books and Special Collections from May 15-22, 2017. The maps were catalogued by Collection Services as part of an ongoing project targeting rare Canadian maps. The project was spearheaded by Margaret Blandford (Collection Services) and Greg Houston (Digital Initiatives). 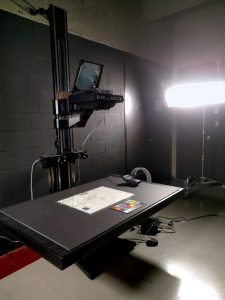 The digitization of the maps was a careful process that took many hours to complete. These fragile maps, ranging in size from a few inches to 9 feet long, were carefully photographed using the Better Light, a digital camera back mounted on a DeVere enlarger located within Rare Books and Special Collections. Even though the camera stand could accommodate material up to 42” x 72”, some of the larger maps had to be imaged in several shots and stitched together in post processing.

Once the maps were digitized and processed, they were exported as high resolution PDF files and added to the digital repository where they are accessible as electronic resources in the Library catalogue. They are also made available to a vast network of researchers on the McGill University Library Internet Archive collection. 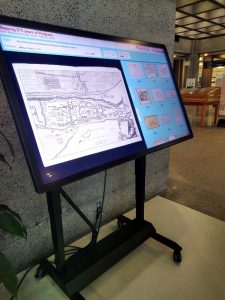 To help explore the maps, an interactive digital exhibition was created on the large touch-table in the McLennan-Redpath Bridge, as well as posters of maps representing Montreal’s history of development. This interactive exhibit enables the user to zoom in on the high-resolution details of each rare and historically important map.

These catalogued and digitized rare maps in the McGill Library collection serve many purposes. They represent physical geographies, recording landmarks, routes, and boundaries. Over the many centuries, cartographers, engineers, publishers, and printers worked to trace the city’s history. As you examine these maps, take a moment to consider why each was made and discover the past 375 years that made Montreal what it is today.

Much of the past resides in the present. At their most useful, these maps can help you to re-examine a place you thought you knew – Montreal. Click on the maps below to access the digital map online. 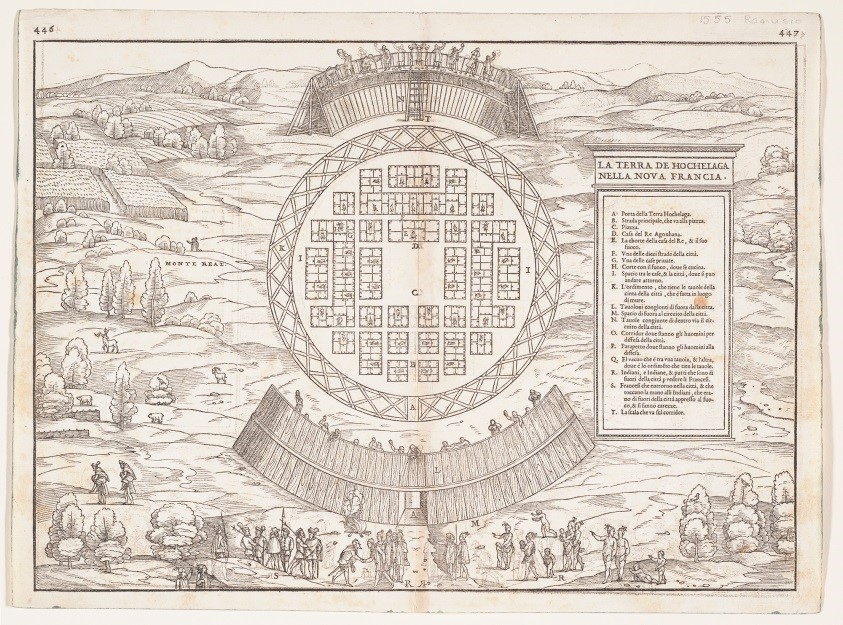 The oldest map of Montreal in the collection is from 1556 by the Italian cartographer Giacomo Gastaldi. It is a plan of the fortified Iroquoian village of Hochelaga on the slopes of Mount Royal.  The woodcut is based on Jacques Cartier’s account, published in Delle navigationi et viaggi in 1556. Gastaldi shows Jacques Cartier shaking hands with Iroquois Chief Donnacona and can be seen at the bottom of the map. Details show the beginning of wooden fortifications and farming.

The stone fortifications were constructed when the French mission named Ville Marie was built in 1642 along the banks of the St. Lawrence River. The French colonial empire became the centre of the fur trade. The French expansion continued until 1760 when New France surrendered to the British Army following the French defeat at the Battle of the Plains of Abraham in Quebec. The British expanded immigration into Montreal and the city’s golden era of fur trading began. 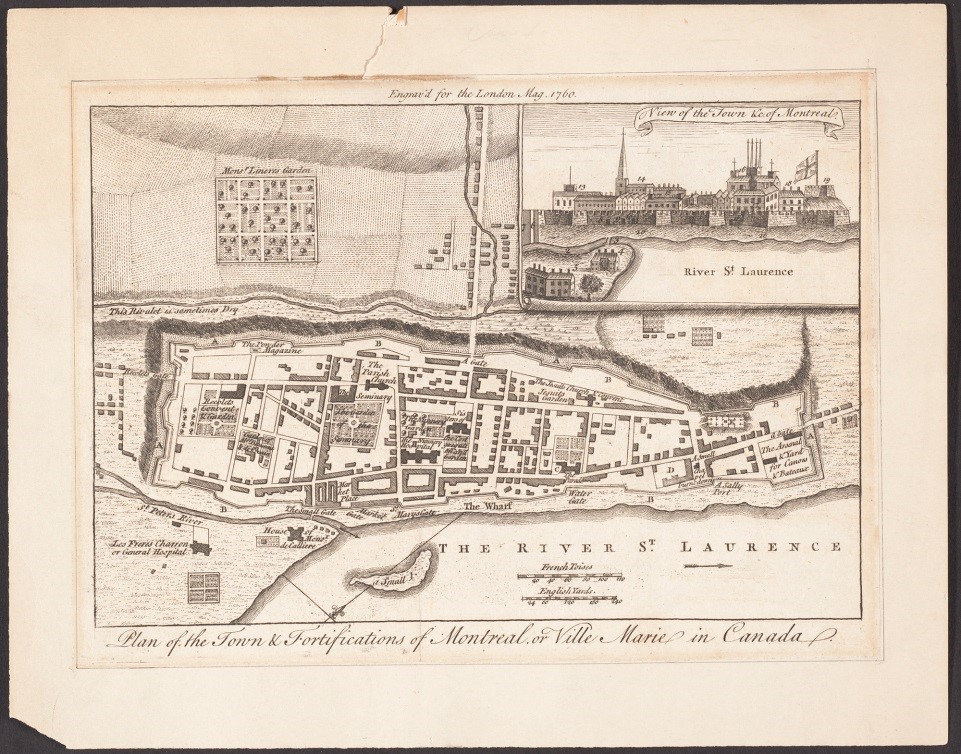 The 1760 map of Montreal by Thomas Jefferys beautifully depicts the fortifications, religious orders, and other important buildings both inside and outside the walls. Jefferys was an English engraver, geographer, and publisher who produced many maps of North America. He showed great attention to detail: for example, he described how one of the streams outside the walls sometimes ran dry. 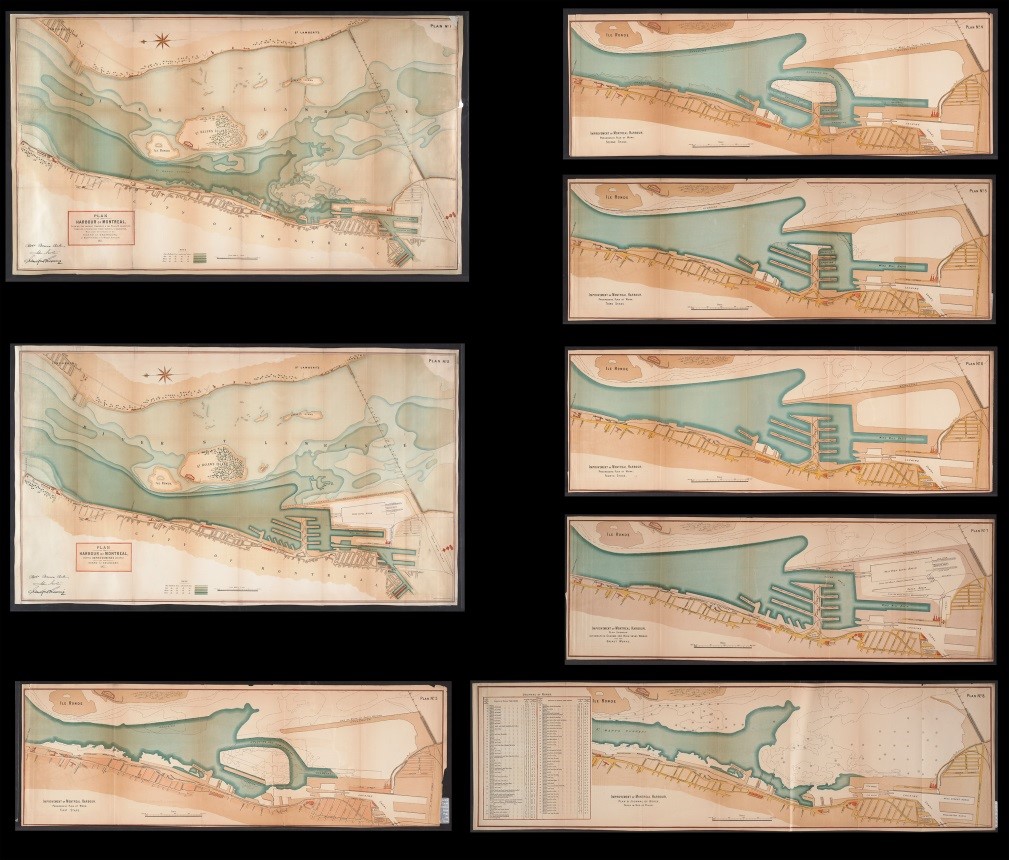 By the 1800s Montreal was an incorporated city and its growth was aided by the development of the Lachine Canal. The railway boom had begun and Montreal was the capital of the United Province of Canada from 1844-1849. The city’s growth can be seen by examining the maps of the time. Montreal was the largest city in British North America and the economic and cultural capital of Canada by 1860.

The collection of 8 hand-coloured maps of the Montreal harbour from 1877 show the progressive plans for improvement and expansion. The cartographers and engineers who drew up these maps were based in Glasgow, Scotland. 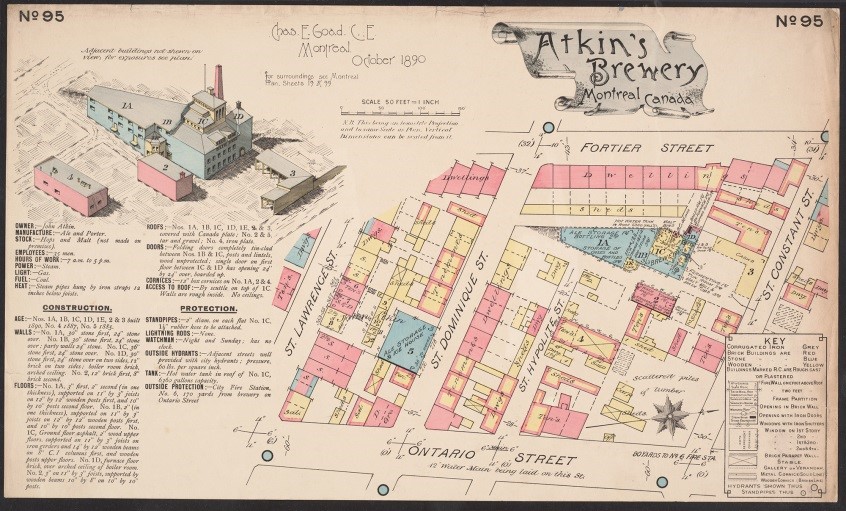 With the rapidly changing urban environment, where most of the structures were made of wood, it was necessary to have fire insurance plans drawn up. Charles E. Goad was an engineer and cartographer originally from England, who settled in Montreal and became known for fire insurance maps. These diagrammatic maps would be his principal work. They were required by the insurance companies at the end of the 1800s and beginning of the 1900s. They were measured drawings of streets and structures, and helped insurers determine risks for policies in the event of fire.

The colourful 1890 map of Atkin’s Brewery offers an invaluable tool for researchers and city planners. This single map brings to life the daily routines and landscape of a lost neighbourhood. Goad recorded street names, widths, and numbers; fire-protection facilities; materials and use of buildings; types of stored materials; and areas of high-risk activities. Fire insurance maps were very labour-intensive and expensive to make and consequently few copies were produced. The library has many copies of his work. 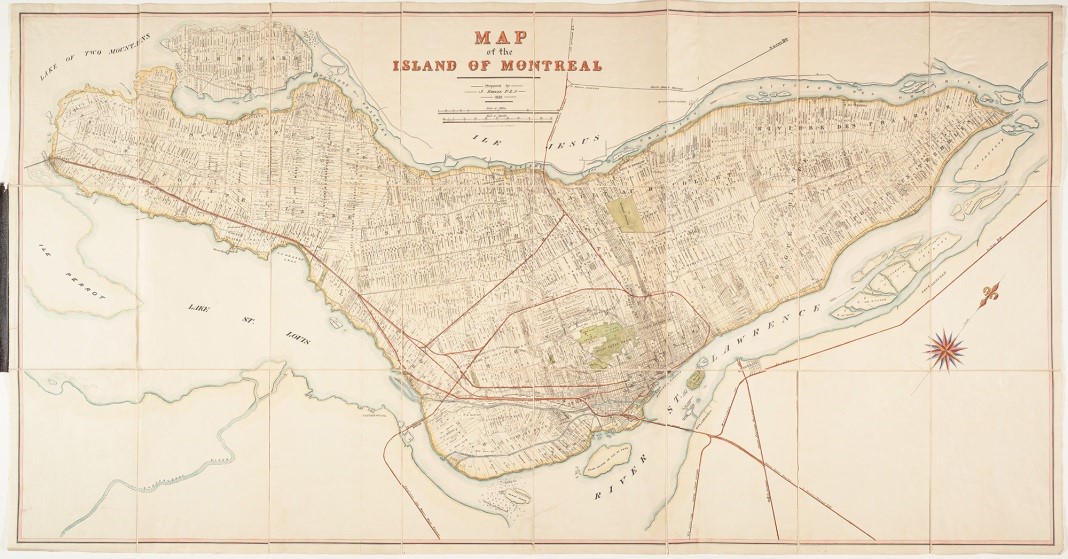 Montreal by the end of the 19th century continued to experience a remarkable expansion. Roads, railway routes, canals, bridges, and farming had extended over the whole island.

The old seigneurial system, which was central to France’s colonization policy, can be seen in the 1892 map by Joseph Rielle. Seigneuries were granted to the nobility, to religious institutions (in return for education and hospital services), to military officers, and to civil administrators. 75 to 80 percent of the population at this time lived on seigneurial land.

The names of all the landowners can be seen in the detailed Map of the Island of Montreal by Joseph Rielle. McGill University’s main campus can be seen, but not the Macdonald Campus in Sainte-Anne-de-Bellevue, which was established in 1905. Farmers’ fields are shown where Macdonald Campus stands today, on the western end of the island. 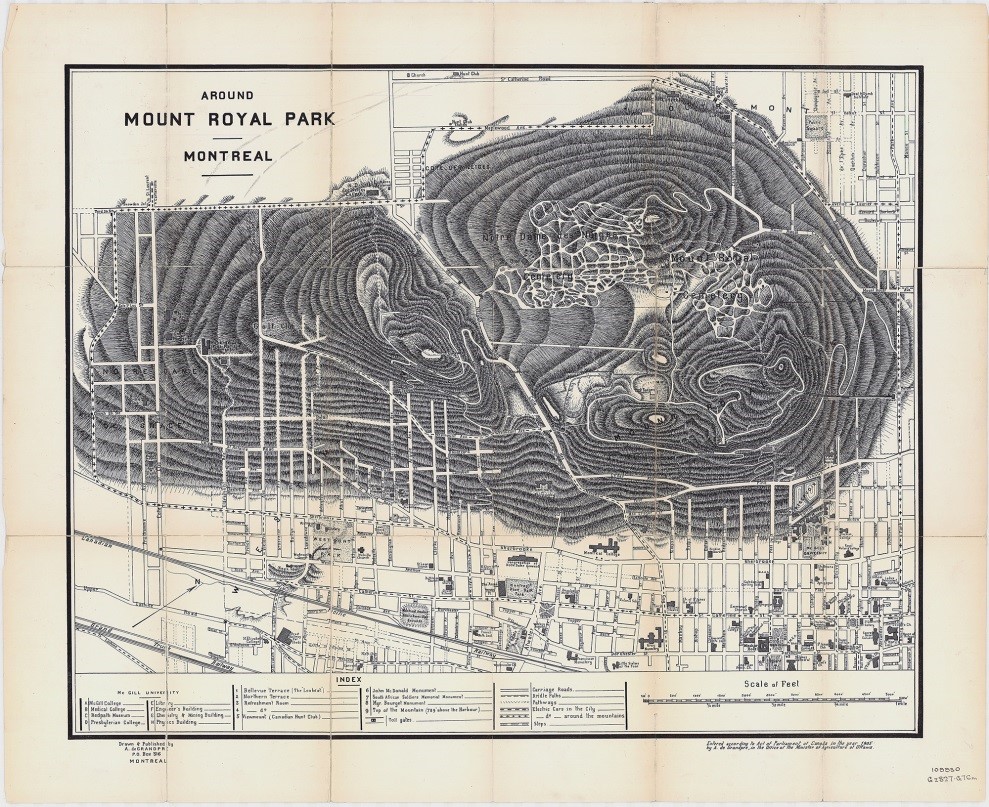 The bourgeoisie emerged at the end of the 19th century and growth of the urban landscape continued. Old Montreal became less residential as rich merchants built extravagant homes closer to the mountain. The Golden Square Mile is the nostalgic name given to this new urban neighbourhood. It was developed between 1850-1930 at the foot of Mount Royal. Frederick Law Olmsted was commissioned to design a park on the mountain and Mount Royal Park was inaugurated in 1876. The map Around Mount Royal Park by A. de Grandpré displays the city streets, buildings, and the mountain park.