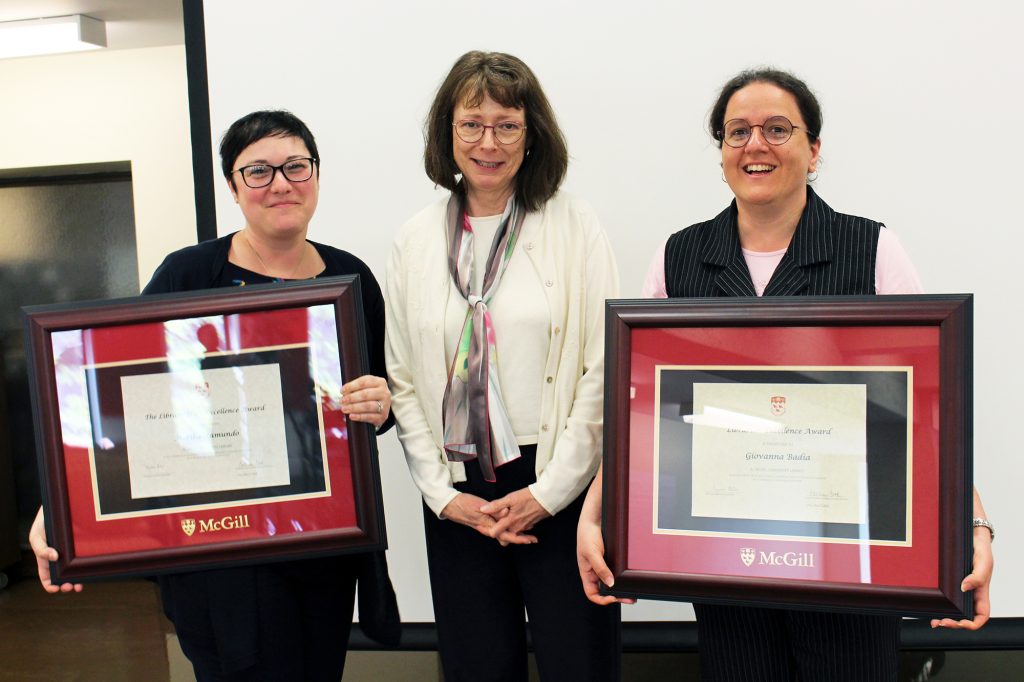 Congrats to the recipients of the 2018 McGill Library Excellence Awards! The awards recognize outstanding contributions to the Library and its mandate. 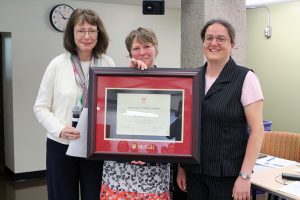 Giovanna is an exemplary librarian and has made a significant contribution both to the McGill University Library and to the profession as a whole.

Where Giovanna has perhaps demonstrated the most impact is through her tireless efforts to serve McGill science and engineering departments as Liaison Librarian. She goes above and beyond in the delivery of reference services and information literacy sessions, making herself available and invaluable to students, faculty, and staff. She is continually experimenting and assessing her practices while at the same time sharing lessons learned with other librarians. Giovanna continues to build on her contributions to positive student and faculty outcomes and experiences, as shown in her innovative support for the Department of Mining Engineering in open access publishing.

She has also demonstrated excellence in academic librarianship and has won the respect and admiration of her colleagues. Her successful research practices are evident in an impressive publication record, with over thirty works that include peer reviewed articles, conference papers and book chapters, four of which were released in 2017. She continues to explore research methods that require a high skill level and attention to detail, such as her project using citation analysis to identify appropriate databases. Giovanna also has an exemplary service record and has made a significant contribution to the profession through associations. Her expertise is recognized by colleagues internationally, as is shown by her role as 2016 Chair of the Special Libraries Association Engineering Division and her involvement throughout 2017.

Her passion, dedication, and innovative spirit shined during her tenure as co-chair of the Library’s Orientation Committee. Under Giovanna’s leadership, the Committee obtained funding to organize the Library’s first ever ice cream social. The event united Library departments and promoted a spirit of connectedness. Its success can be greatly attributed to Giovanna’s fearlessness in testing out inventive ideas and to her strong sense of diplomacy.

Committed and selfless, she doesn’t hesitate to give advice and that advice always comes with an offer to help. She’s an excellent team member and significant contributor to the McGill community. In short, Giovanna is generosity. 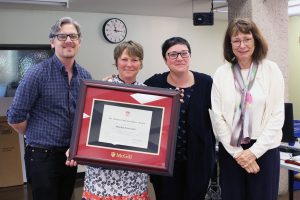 Merika was nominated for this award by colleagues, former students, volunteers, Friends of the Library members and collaborators, in recognition of her boundless creativity, outstanding leadership and tireless efforts to promote the McGill Library.

A co-worker who has known Merika since she first joined the Library in 2010 had this to say: “Merika’s work impacts all aspects of the Library’s mission to support the teaching, learning, and research needs of students, faculty, and researchers. Her writing and visual communication initiatives cover the spectrum: constantly keeping our staff informed, supporting the Dean in her internal and external communications channels, providing outstanding support to our Friends of the Library lectures and outreach, not to mention launching new social media campaigns. No job is too big or too small for Merika. She brings professionalism and innovation to every task.”

Above and beyond her daily projects, Merika’s collaborative, pro-active approach is illustrated by several recent initiatives. She successfully launched two Library Innovation Fund initiatives: Enhancing McGill Library’s social media presence and McGill’s Little Free Libraries (LFL), a campus-wide book exchange project. Both projects were very successful and forged close collaborations between the Library and several university-wide units, including McGill Central Communications, the Faculty of Education and the Office of Sustainability.

Not one to take credit for herself, Merika always puts her colleagues and team members ahead of herself. She has a natural talent for bringing out the best in people and encouraging them to succeed. A former student who worked closely with her spoke highly of her openness and ability to inspire others: “She taught me how to use the tools I needed and gave me the time and patience I needed to learn, make mistakes, and try again. I felt like my opinion was valued and taken into consideration. The freedom and trust she gave me allowed me to flourish, pick up new skills, and express my creativity.”

Anyone who has met Merika knows within minutes that she is a beacon of positivity. Her optimism is infectious and she approaches the most daunting tasks with a smile. She throws herself into each project, large and small with a positive, can-do attitude. “She makes it all look easy.”