Drama Beyond the Frame: 19th century Japanese prints in the Visual Arts Collection

The Visual Arts Collection’s Visible Storage Gallery on the 4th floor of the McLennan Library is home to a Japanese woodblock print by Utagawa Kuniyoshi titled Actor Ichikawa Kuzo II as Saitogo Kunitake (1846-47). In the print, pictured below, the actor is depicted as portraying a warrior. He meets the viewer’s gaze directly, implicating them in the unfolding drama.

Kuniyoshi, the artist, was active in the 19th century in the city of Edo, present day Tokyo, during the repressive rule of the Tokugawa Shogunate regime. Despite severe state-sponsored censorship and restrictive laws, the arts flourished during this period, largely due to a growing class of artisans and merchants, dubbed “townspeople” by the Shogunate, who inhabited Japan’s urban centers. Traditional Japanese art like pottery and painting was mainly commissioned and consumed by the aristocracy. Woodblock prints became especially popular from the 18th century forward, as the printing process allowed for the intricate colours and patterns in the artist’s design to be affordably and repeatedly reproduced for this new class. Kabuki, a form of highly stylized Japanese theatre, was an entertainment of choice for townspeople, who were also the main consumers of woodblock prints. And Kabuki actors, like the one represented here, were much like modern-day celebrities, making for ideal woodblock subjects, much like Brad Pitt on a GQ cover.

Thanks to a generous donation from Dr. Joanne Jepson, M.D.,C.M., ‘59, there are numerous kabuki prints in McGill’s Visual Arts Collection. Many, like Kuniyoshi’s, are from Edo, home to a form of kabuki theatre known as aragoto, or “rough style.” These kabuki prints all depict actors in moments of emotional intensity (anger, elation, epiphany), which follows from the aragoto theatre style and its action-driven plots.

Often, the drama associated with each print extended far beyond the frame. All woodblock prints from this era are inscribed with the artist’s unique seal, which functioned like an extension of their signature. This print bears Kuniyoshi’s later seal: a red paulownia flower, seen at middle left just below the inscription. Kuniyoshi changed his seal in 1844 to distance himself from his contemporary, Utagawa Kunisada, after the latter decided to singularly assume the seal (and name) of their deceased teacher. Dr. Jepson’s donation also includes prints from Kunisada with that contentious seal. The drama between these two artists brews on in our Collection.

As a McGill Art History student and summer intern at the Visual Arts Collection, it is exciting to have the opportunity to enrich the Collection’s files by discovering such unexpected connections between objects and painting a fuller picture of the context for these 19th century Japanese prints. 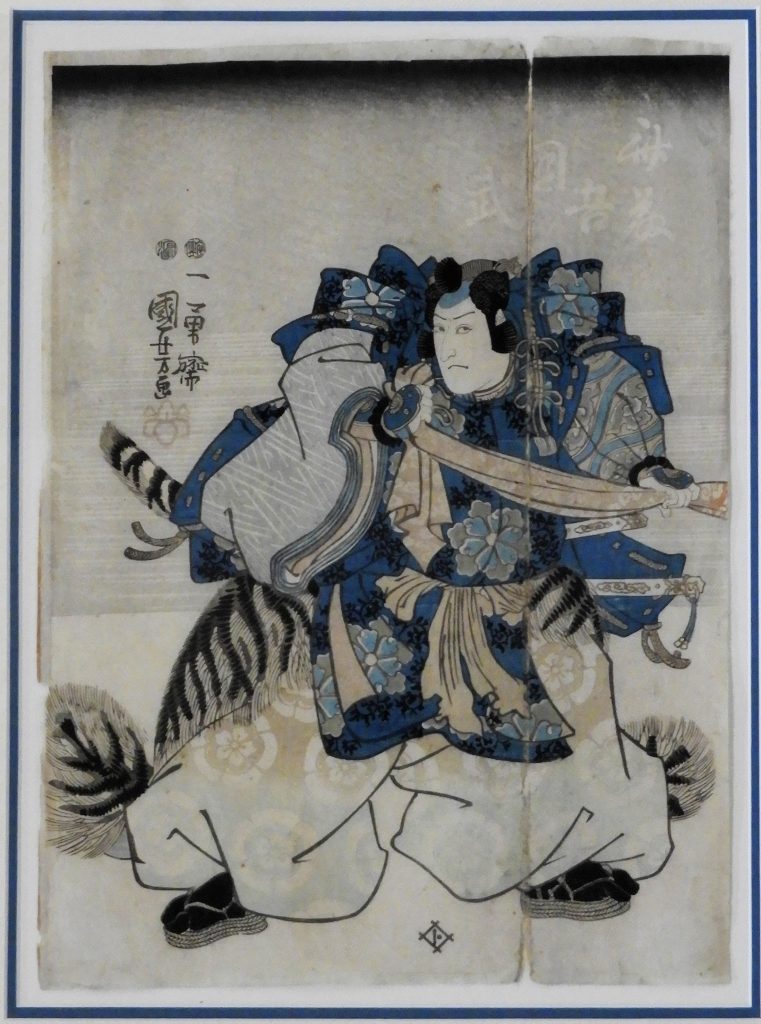