Amongst the manuscripts in the Osler Library are three volumes that outline in exquisite detail the daily occurrences that one English physician found significant enough to record in his diary. Jonas Asplin was originally from Little Wakering in Essex, but spent five years practicing medicine in Versailles and Paris. The journals housed at the Osler Library, which cover the years 1819-1824, were recently digitized and are currently being transcribed. 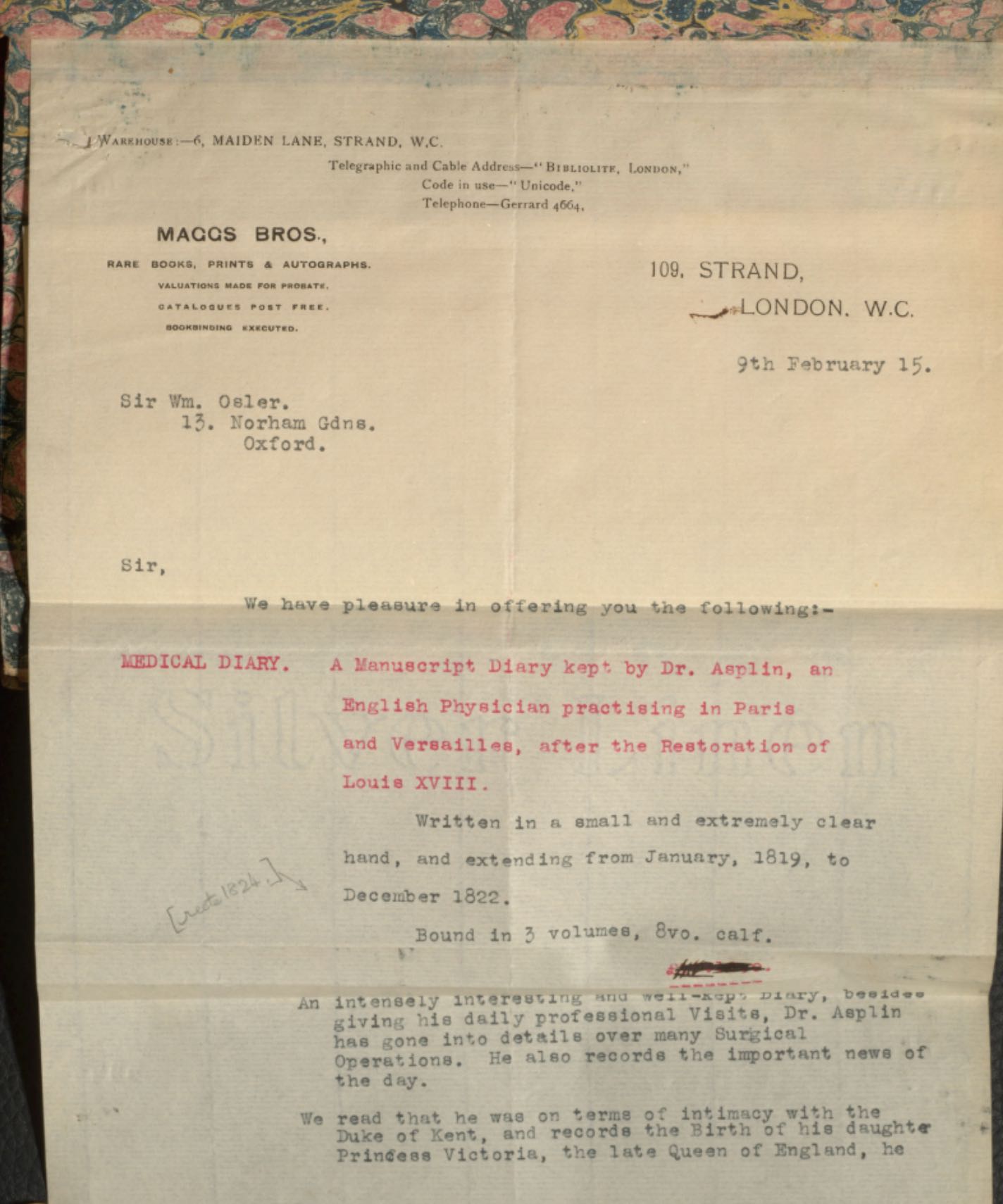 Looking at Asplin’s diaries for a few select days provides a fascinating snapshot of what was important in this doctor’s life. A significant proportion of his remarks are devoted to the weather and to those with whom he socialized, but he peppers his commentary with current events. Not surprisingly, within the accounts of his daily rounds are also remarks on medicine, but these by no means take precedence.

In terms of the substance of the entries, each begins with a meteorological summary: the general conditions, often the temperature (in degrees Fahrenheit), and the direction of the prevailing winds. When covering his daily activities, Asplin provides details about the routes he takes, which means that once fully transcribed the diaries could give rise to an interesting mapping exercise; similarly, the names he mentions appear to be those of individuals who were influential in and around Versailles, especially amongst the English-speaking community. Until the full transcript is available, a few excerpts will suffice to provide a glimpse of the three volumes left by Dr. Asplin from his years in France.

Up at 5. – The weather this morning is extraordinary – there is a very dense fog – flying with a fresh breeze from the N. – at the same time the thunder is pretty general tho gentle from all quarters except the E. without any very heavy clouds. – ½ past 6. Thunder now heavy and general except from the E – Some rain. – The lightening not very vivid – but I never heard so much thunder from such light clouds. – Rains steadily. – 6 ¾ Heavy shower. getting bright in the S.E. – 8. Fine + Sunshine.

[vol. I, p. 149] A bit further down, he includes a passing comment that is not atypical of his medical content: “The man who keeps the cottage has received a very severe sabre wound on the shoulder from a soldier, which I promised him to look at tomorrow.” 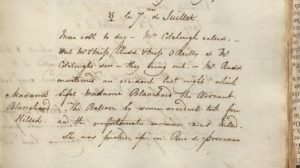 Regarding current events, on Wednesday 7 July, Asplin records the death of the aeronaut Madame (Sophie) Blanchard. The following day, he mentions that the king is going to St. Cloud from the Tuileries, and on 9 July Asplin returns to the man wounded by a soldier while passing judgement on the treatment given to that man by a military surgeon: Walked by the Bois de Satory to [p. 152] the Village of Buc to see a poor man who received a Severe Sabre wound a short time since from a drunken Soldier – it is a deep wound but might be healed by proper treatment in Eight days – but as treated at present by the Surgeon of the Regiment to which the Soldier belonged, it is likely to take as many weeks. – there is a deep descending sinus, which if laid open would heal immediately – But I suppose the Surgeon thinks one wound enough.

One year later, on 9 July 1820, Asplin records a very ordinary day and concludes with very extraordinary charges laid against the queen [vol. I, p. 364]: At 8 1/2 . Visited Mr. Coare on horseback – Visited Miss E Stephens + called on Mrs. S. – home – Sent for to Miss Bolton – Drove Eliza there, who went on to Church –

Attended an Agricultural meeting at the Mairie at 12. – The prefect presided. – Day more warm and sunshine. – Called at Colcloughs – Mr. Reed came there. – In the Evening to Tea at Mr. Stephens Mr. Fitzwilliam there. – Mr. Weeks + Miss Weeks set off for Paris – Drove Mrs. Stephens + Emma by Triannon round by the St. Cyr road. – Eliza + the others walked in the Gardens – returned + Visited Miss Bolton – sent the gig home. – We walked home with Mr. Fitzwilliam by the Boulevard de la Reine + Rue de Provence – Night very fine + appears settled. –

Charges of Adultery are now formally made against the Queen – + proceedings going on.

The following year, in 1821, Asplin covers in a public execution in one entry and the reported death of Napoleon Bonaparte the next.

Colonel Souther called to say there is to be an Execution to day. –  proposed meeting me there – 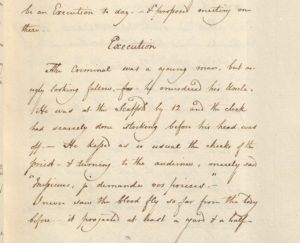 The Criminal was a young man, but an ugly looking fellow, for he murdered his Uncle. He was at the Scaffold by 12 and the clock had scarcely done striking before his head was off. – He kissed as is usual the cheeks of the priest – + turning to the audience, merely said “Messieurs, je demande vos prieres. –”

I never saw the blood fly so far from the body before. – it projected at least a yard + a half –

Visited Mrs. Reed + family _ proceeded to call on Hunt to accompany him as by appointment to the Chateau. – met him + Mrs. Hunt in Rue de Provence. – Called on Cap. Hoffman who went with me to the Chateau + met Hunt there – Left Hunt on the Avenue de St. Cloud, + went home – Visited Mrs. Colclough. – In the Evening Louisa accompanied us to Mrs. Raymonds party in Rue de l’Orangerie. – There [p. 128] is a report of the death of Bounaparte [sic]. – not a large party. – home at 1. – Night fine. –

Confirmed – he died at St. Helena the 5th May from a Cancer in the Stomach – after a confinement of 40 days. – –

In the third volume, at least for these dates, there is a return to a strikingly methodical routine:

– Hearing of the resignation of the Revd. Mr. Beaver.

Of the Church at Versailles – determined to exert myself to get the Church for Revd. Mr. Bazeley. – And accordingly rode over to Versailles to use any influence for the purpose. [p. 293] clear. – Mr. Bazely went to Boulogne + met one there, wishing to see his friend the Revd. Mr. May first, – Called at Mr. Richards at Chaillot + on Colonel Fraser at Passy – met Mr. Bazeley by the Church at Boulogne + then on to Mr. Stephens’s at Versailles – Called on Hunt + Caplain Hoffman R.N. + returned home by 11. – very fine night. –