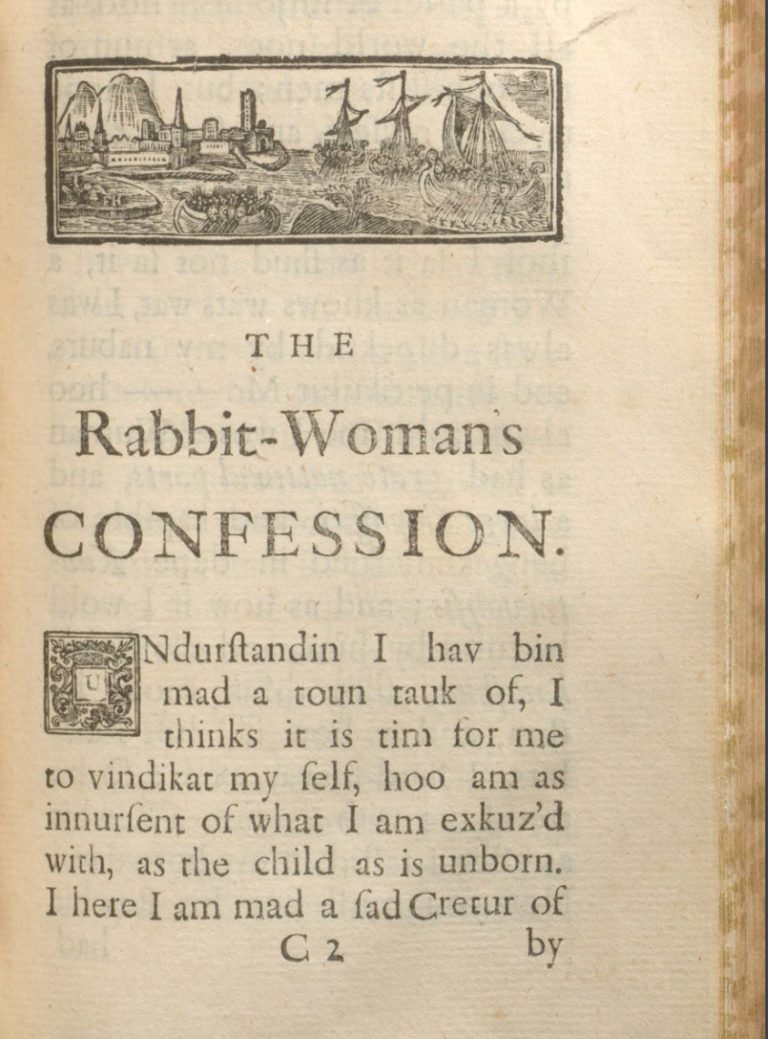 George Steevens. A Complete Collection, of All the Tracts, Both Printed and Manuscript, Relating to Mary Tofts, the Celebrated Rabbit Woman of Godalming. London, 1726. Osler Library of the History of Medicine, WZ 260 S815 1726-1753.

Currently on display in the lobby of the McLennan Library is the exhibit, “Curiosities of Conception,” co-curated by Frances Cullen and Shana Cooperstein with contributions by Robin Lynch, Lauren Harnish, Rach Klein, Anya Kowalchuk, and Kristy Kong. The exhibit addresses many issues pertaining to fertility and conception, with a particular focus on teratology. Here, we wish to highlight a few items from the Osler Library of the History of Medicine that are either relevant to or appear in the exhibit, and which have recently been digitized.

1. Steevens, George. A Complete Collection, of All the Tracts, Both Printed and Manuscript, Relating to Mary Tofts, the Celebrated Rabbit Woman of Godalming. London, 1726. 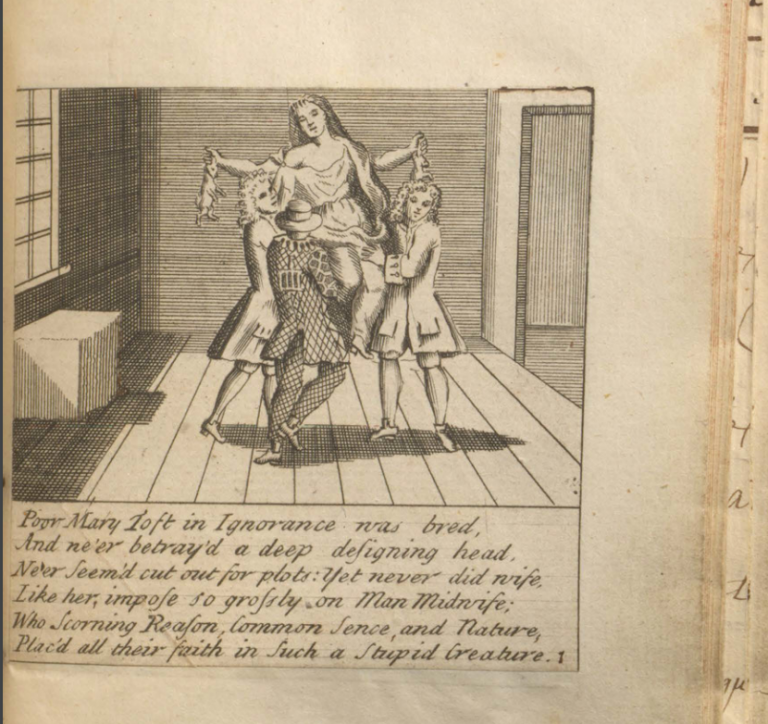 Mary Toft is mocked here, and elsewhere, as an ignorant woman.

Currently in the popular media are several discussions of the historical accuracy of the film, The Favourite. Curiously relevant to this blog post is the film’s representation of Queen Anne’s bedroom as home to seventeen rabbits, representing her children who were either stillborn, miscarried, or who died in infancy or childhood. It so happens that Mary Toft, the subject of several Osler Library tracts that were recently digitized, was said to have given birth to seventeen rabbits. Given the chronological proximity of Mary Toft (whose story broke in 1726) to the reign of Queen Anne (1702-1714), it is difficult not to draw a connection between Mary Toft’s alleged offspring and Queen Anne’s representational herd.

The connection, however, may not be as it seems. As much as it is tempting to suggest that Mary Toft was expressing some sort of association with her former Queen, there is no evidence for this. The rabbits representing Anne’s children are but an artistic expression created for The Favourite. This suggests that the link may in fact go the other way. It is plausible that those who undertook extensive historical research for The Favourite might have come across and found inspiration in the story of Mary Toft. 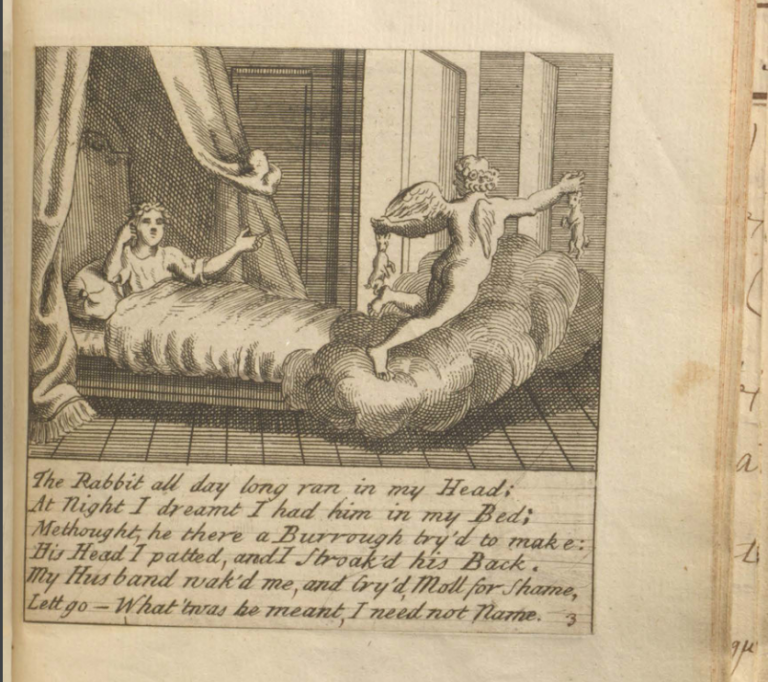 Mary Toft’s dream of rabbits, which preceded her giving birth to the creatures.

The case of Mary Toft is worth exploring. The work digitized here contains several accounts from the time, collected in one bound volume. There have been some recent scholarly historical investigations of Toft, including an article by Karen Harvey, who argues that the episode stemmed from social and economic tensions present at the time. (See: Harvey, Karen. “Rabbits, Whigs and Hunters: Women and Protest in Mary Toft’s Monstrous Births of 1726*.” Past and Present238, no. 1 (2018): 43-83. doi:10.1093/pastj/gtx063.) 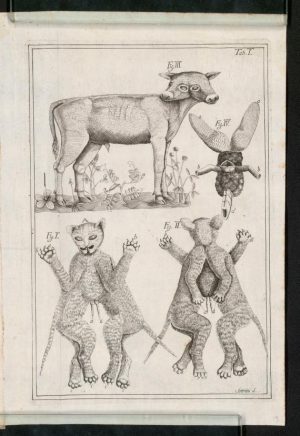 Giovanni Bianchi’s work on teratology (though that term had not yet been coined) was published just over twenty years after the case of Mary Toft played out in England. De monstris ac monstrosis (Venice, 1749) was published under Bianchi’s Latin name, Janus Plancus. It is strikingly different from the accounts of Toft, in that the latter works have an air of the tabloid press whereas De monstris ac monstrosis is in the academic language, Latin, and purports to provide studied explanations for “monstrous” births.

3. (a) [pseudo-]Aristotle. Aristotle’s Master-Piece : Or, Every Woman’s Book! : Dispaying All the Secrets of Nature, As Exhibited in the Creation of Man. London: Printed for J. Duncombe, 18uu. 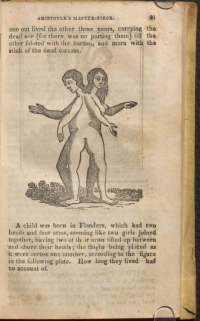 Conjoined twins were a popular theme in teratological works. 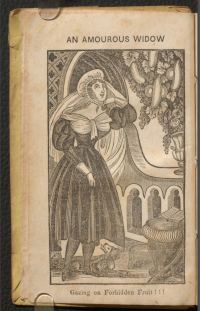 From Duncombe’s edition of Aristotle’s Masterpiece, the frontispiece of the amorous widow.

(b) Aristotle’s Master-Piece Completed in Two Parts : The First Containing the Secrets of Generation in All the Parts Thereof…The Second Being a Private Looking Glass for the Female Sexe. London: G. Davis, 18uu.

Aristotle’s Masterpiece was not by Aristotle at all, but used his name freely to lend an air of legitimacy to a popular book that touched upon themes that might claim to come from Aristotle’s De generatione et corruptione.  The book was first printed in the seventeenth century and was popular as a manual for information about female sexuality and midwifery. The work continued to be printed into the twentieth century in several formats and editions, and on both sides of the Atlantic. The Osler Library has amongst its holdings several copies of the Masterpiece, one of which is on display in “Curiosities of Conception.” The two linked above are not in the exhibit, but feature in a piece by Mary Fissell in Many Women, Many Voices. 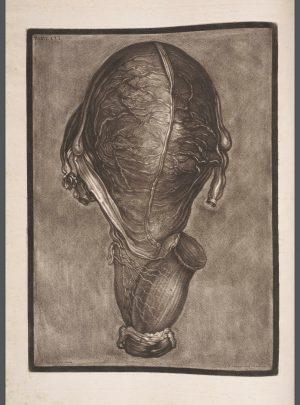 Eighteenth-century obstetrical atlases, such as this one by Charles Jenty, were astonishing in their level of detail.

This work is one of the elephant folio obstetrical atlases held by the Osler Library. These tremendous volumes allow a life-size examination of the human body, or in this case the female uterus. Together with William Hunter’s Anatomia uteri humani gravidi tabulis illustrata (London, 1774) and William Smellie’s A set of anatomical tables: with explanations, and an abridgement of the practice of midwifery (Edinburgh, 1784), Jenty’s work reveals the tremendous strides made in medical understandings of obstetrics during the eighteenth century.

In closing, we invite you to have a look at these and many other titles in the ever-expanding Osler Library sub-collection within the Internet Archive: https://archive.org/details/mcgilluniversityosler.