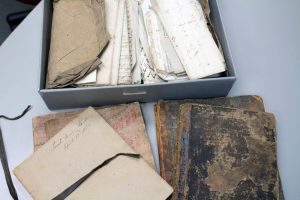 Thanks to all who took up our riddling challenge offering answers from across Canada and abroad (including England, Ireland, and New Zealand). We promised to provide some answers and here they are!

Earlier this summer, we asked readers to solve table setting riddles penned by Eliza Smithson in 1804 in one of the manuscripts from Doncaster, England, held in McGill’s Rare and Special Collections. In the place of the name of a dish, Smithson provides only riddling clues. Puzzle me this: What was she imagining she might serve for the first and second courses of her dinner? More than 200 years later, thanks to crowdsourcing, we can suggest some excellent answers. Look below for images of her table diagrams, as well as transcriptions and proposed solutions.

Look for more table settting’ or ‘bill of fare’ riddles shortly, and please send any further suggestions to the comments field or email info.library@mcgill.ca. With congratulations to Elizabeth Thomson for winning the bookstore coupon; and with honorable mention all those talented riddlers whose names appear here beside their solutions! 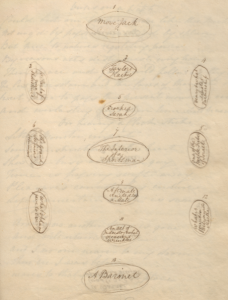 A part of your shoes stewed

Henry and what denotes Partnerships

The interior of a sportsman

One of the twelve tribes of Israel

A female united to a male

What Adam gave to Eve

An act of industry and what occasions wrinkles

What is found in beds joined to Martha

A Barren waste and a Sportman’s Delight

The first temptation & a slight gust of wind

What Idle people do

A Pudding made of a Dutch Prince