Home › Features › In Search of a Single Boot: A Reflection on the Things Lost and Found at McGill Library

In Search of a Single Boot: A Reflection on the Things Lost and Found at McGill Library 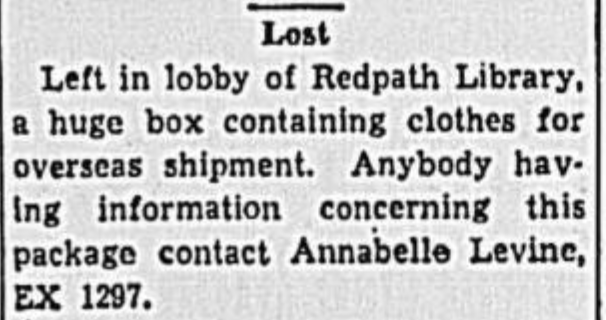 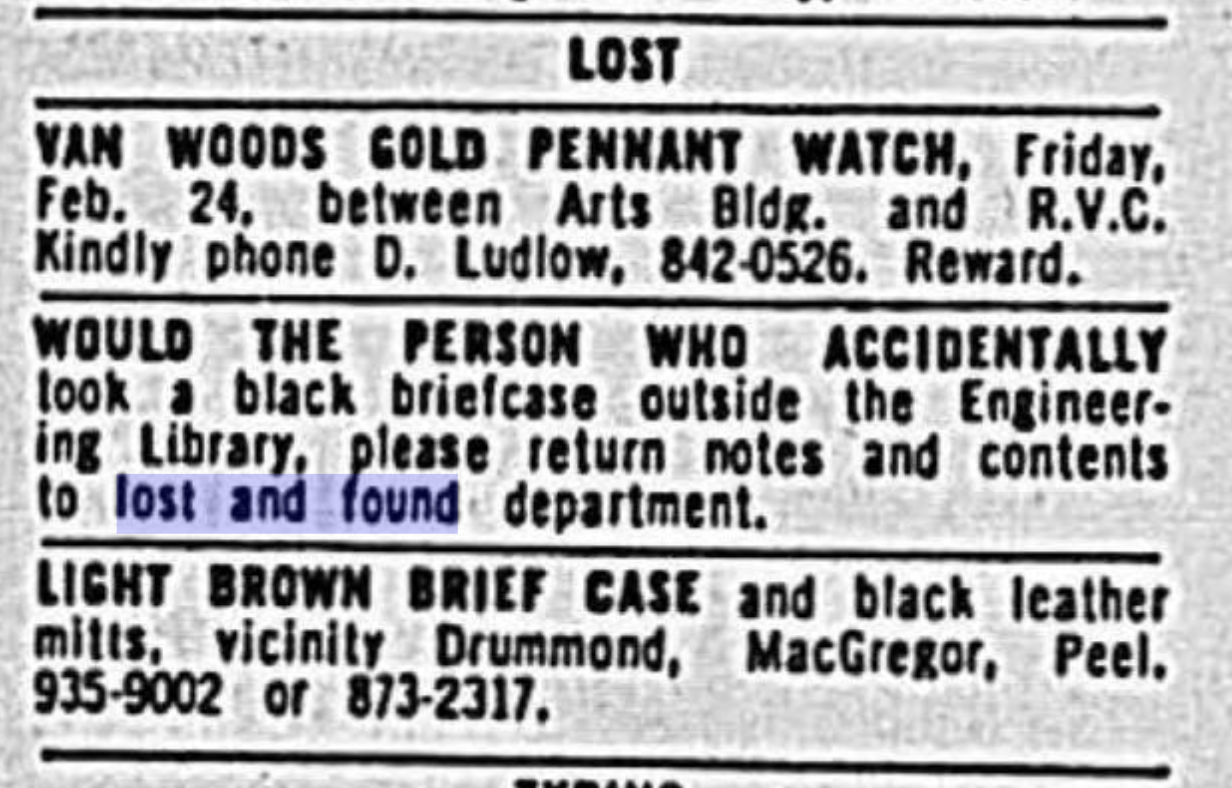 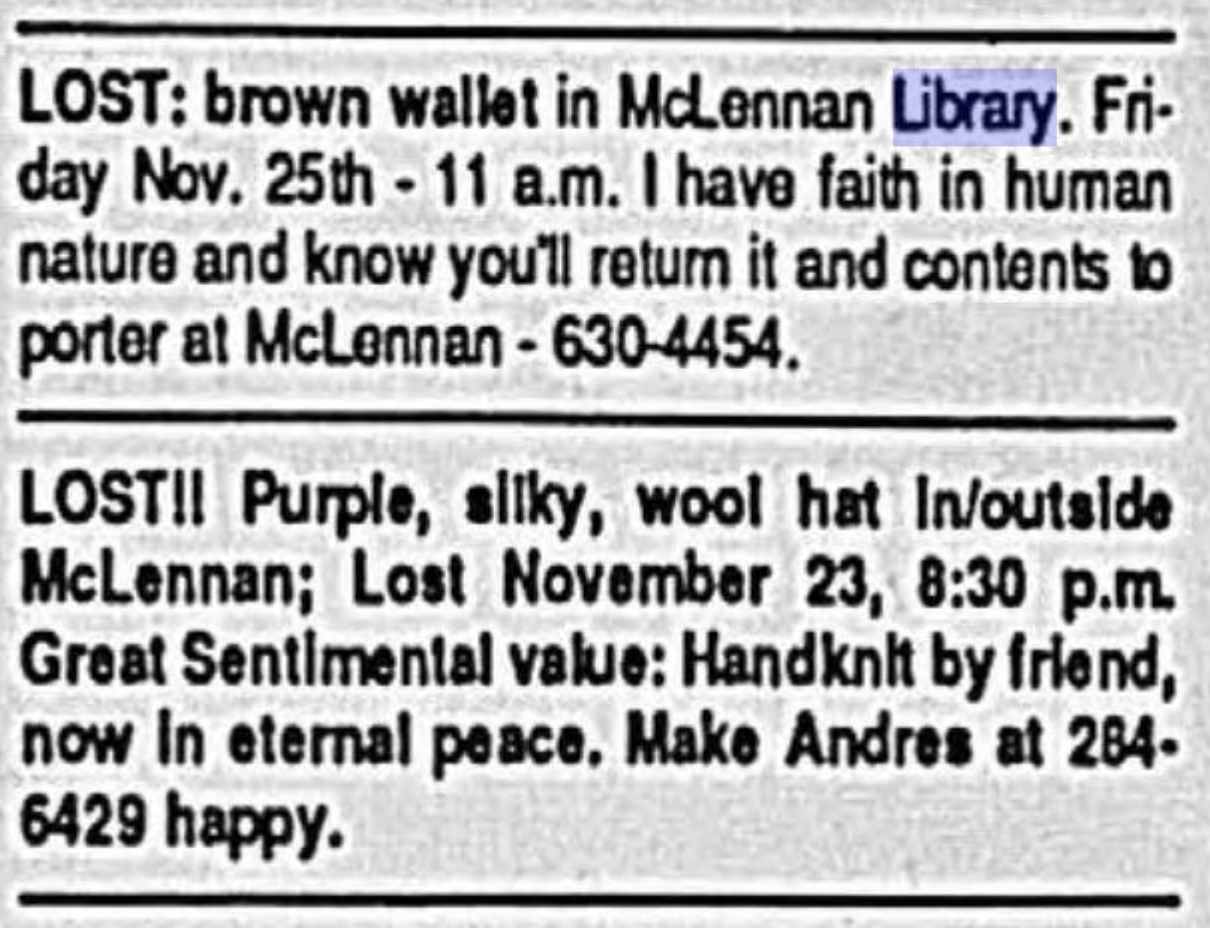 The Internet Archive holds the McGill Student Publications Collection that includes  McGill student newspapers from as early as 1874. If you dare to start digging through this resource platform you might find yourself resurfacing a couple of hours later, with mouth wide open, fascinated by all the stories exploring McGill’s student life over time.

While skimming through newspapers, I got to imagine the life of students in the 1950s, where communication was done mainly in person or on paper. There were no computers, emails, or smartphones. Nowadays, such technology is essential for communication between one another, and it makes it way easier to reach audiences, friends, and family abroad. In this day and age, it’s also relatively easy to find lost objects. McGill’s Entrance Groups on Facebook get at least 1-2 posts a week where a student asks the community to look out for a lost ID or a wallet. I’ve seen similar messages on every other social media platform. In many cases, the owner of the lost item is found and the object is safely returned to its rightful owner. New technology definitely makes the process of finding lost items that much simpler, right? Not necessarily…the message goes out into the void of the internet and no one really has control over who receives the message but it’s still a fair attempt at getting your belongings back.

This leads to an obvious question – how did students find their lost items back in the day? It’s not as though they could send a message to thousands of people in one click. While skimming through the slew of McGill Daily newspapers all the way back from the 1900s, I noticed a section called “LOST” or “LOST & FOUND”. Students and staff could submit their plea to the McGill community to look out for lost items. The majority of the ads placed asked folks to look out for jackets, pens, pencils, jewellery, and wallets. Now, I don’t have any clue about whether this method was successful and what the percentage of items found might be but it is fun to imagine that since everyone read newspapers back in the day, often items would be returned or found.

What does the modern “Lost and Found” at an academic research library look like? I spoke to Jayne Watson-Sevigny, the Library staff member who manages the comings and goings of lost things at McLennan-Redpath Library Complex, to find out more.

Q: What items do you usually find at the McLennan-Redpath?

Jayne Watson-Sevigny (JWS): Water bottles are the most popular things, followed by textbooks without names on them, clothing, and lunch boxes (sometimes the food is not even eaten). The problem is a lot of things are left unidentified. If it’s a $75 textbook we can’t return it to [the owner]. Items stay at the branch for 6-8 weeks. If it’s clothing, we donate it, if it’s a textbook, it gets donated to the donation book truck. We don’t keep the water bottles because there’s no way to disinfect them…it’s really a shame. We also find a lot of chargers. Sometimes we find just one earbud. Lost ID cards, credit cards, immigration or health insurance cards stay behind the desk overnight. If we can, we’ll email the student to let them know we found an item.

So what did you end up doing with cards and sensitive documents if no one claims them?

JWS: We shred them because it’s confidential information.

Do you find any other odd items?

JWS: There are stuffed toys, bras, single mittens, hats, umbrellas, notes from class. We recently found a single boot with tags still on it.

How many items do you receive on a daily/weekly basis?

JWS: On average, we get 25 items per day. One time, we found three ID cards in one hour. So many people don’t bring stuff to the lost and found especially now due to COVID, however, there are still some people who do bring stuff back to the front desk, and I always, always, always, thank them for doing the right thing.

What would your advice be to prevent students from losing things?

JWS: Put your name on as many things as you can. I don’t know what to do about earbuds… but having easily identifiable things makes it easier. One time we found an earbud container and it was decorated with a little sticker. It’s these little things that make it easy to get the item back to the person quickly.

It’s interesting to see how people would go out of their way to submit a Lost & Found ad to a newspaper for miniscule things, such as pencils or earrings. Watson Sevigny comments, “If somebody came [to the lost and found] and said “I lost my pen”, I would think that’s odd because no one asks us to look for a pen….this would have to be one very special pen.”

Like a lot of students, I probably wouldn’t go out of my way to find the one pencil I forgot to pack when I was leaving McLennan 6 on a Saturday evening. I’d just get a new one! However, this is the difference between this generation of students and those who came before us –  we live in a consumerist society, and I don’t think we see purchases as an investment but rather need-based purchases that serve us in a moment. Items held more value back in the post-war times and people couldn’t afford losing them. It was about preserving what you already have to cut expenses as much as possible. Therefore, the vintage “Lost and Found” was probably in high demand and promoted by media outlets such as The McGill Daily.

One time, I lost my credit card somewhere around the Milton Park area. I wasn’t able to find it but, looking back, did I put that much effort into searching for it? Probably not. I checked a couple of places and flipped my room inside out, but very soon after I gave up and blocked the card. It’s that simple to do these days. One click and you’ve got a new card too if you’d like. I didn’t even bother sending a message out to Facebook groups to look for it. Even my attitude about losing something as valuable as a credit card seems to be quite perfunctory. Maybe if I made a posting about it through one of the social media channels I would’ve gotten it back… I guess we’ll never know.

The archival collection of newspapers from The McGill Daily bring back this nostalgic feeling, where you can reminisce on the days where finding lost items was a little adventure of its own, where it wasn’t a simple click on your phone to a colleague or a friend that found your lost boot, where people would write each other letters if they missed someone. However I do appreciate how far we’ve come with making our lives a little bit easier. If you do lose something at a Library branch, don’t be shy – ask someone at the Info Desk for help. This is definitely easier than posting an ad in a newspaper.