Home › From the Stacks › Dress the Part! The Costumes of Conundrum Suppers

Dress the Part! The Costumes of Conundrum Suppers 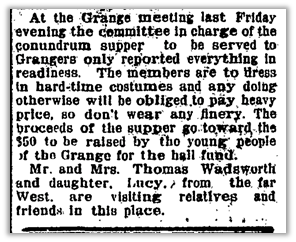 During the late 19th and early 20th centuries, Protestant Churches would often host fundraising events called Conundrum Suppers. At these events, guests would order from menus entirely composed of riddles! Yet riddling menus were not the only entertainment. Performances and games were often on the agenda as well. Many guests even came in costume!

During the second half of the 19th century, clothing culture changed dramatically around the world as industrial production made clothing more varied and accessible.[1] You can see this through newspaper commentary on one Conundrum Supper, at which hosts arrived in costume “such as Martha Washington might have worn.”[2]

Not all events demanded guests dress like the upper classes. More often, guests were invited to dress ‘down’, arriving in the attire of the lower echelons of society. In the example to the right, hosts dressed in “hard-time” costumes and asked guests to arrive without finery! Had their party been held ten years later, after the stock market crash, such instructions might have struck a sour note. In one other pre-stock market crash party, hosts described their Conundrum Supper as a “poverty social,” in which “a prize will be given for the poorest dressed person there.”[3] Dress and you shall receive.

Find out more here. Do you have a disguised riddle to share? Reach out to @McGillLib, @McGillRoaar or email nathalie [dot] cooke@mcgill [dot] ca.