Home › Features › Christmas riddle: What is the link between an eminent geologist, Christmas spirits, the founder of the Scouts and J.K. Rowling?

Christmas riddle: What is the link between an eminent geologist, Christmas spirits, the founder of the Scouts and J.K. Rowling? 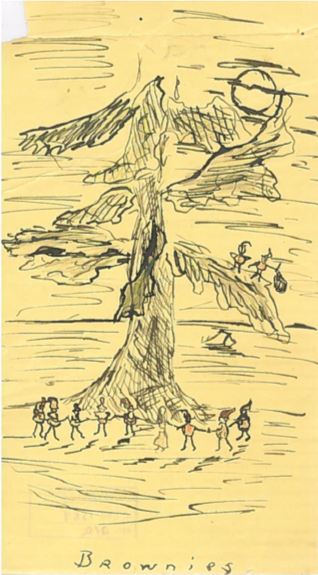 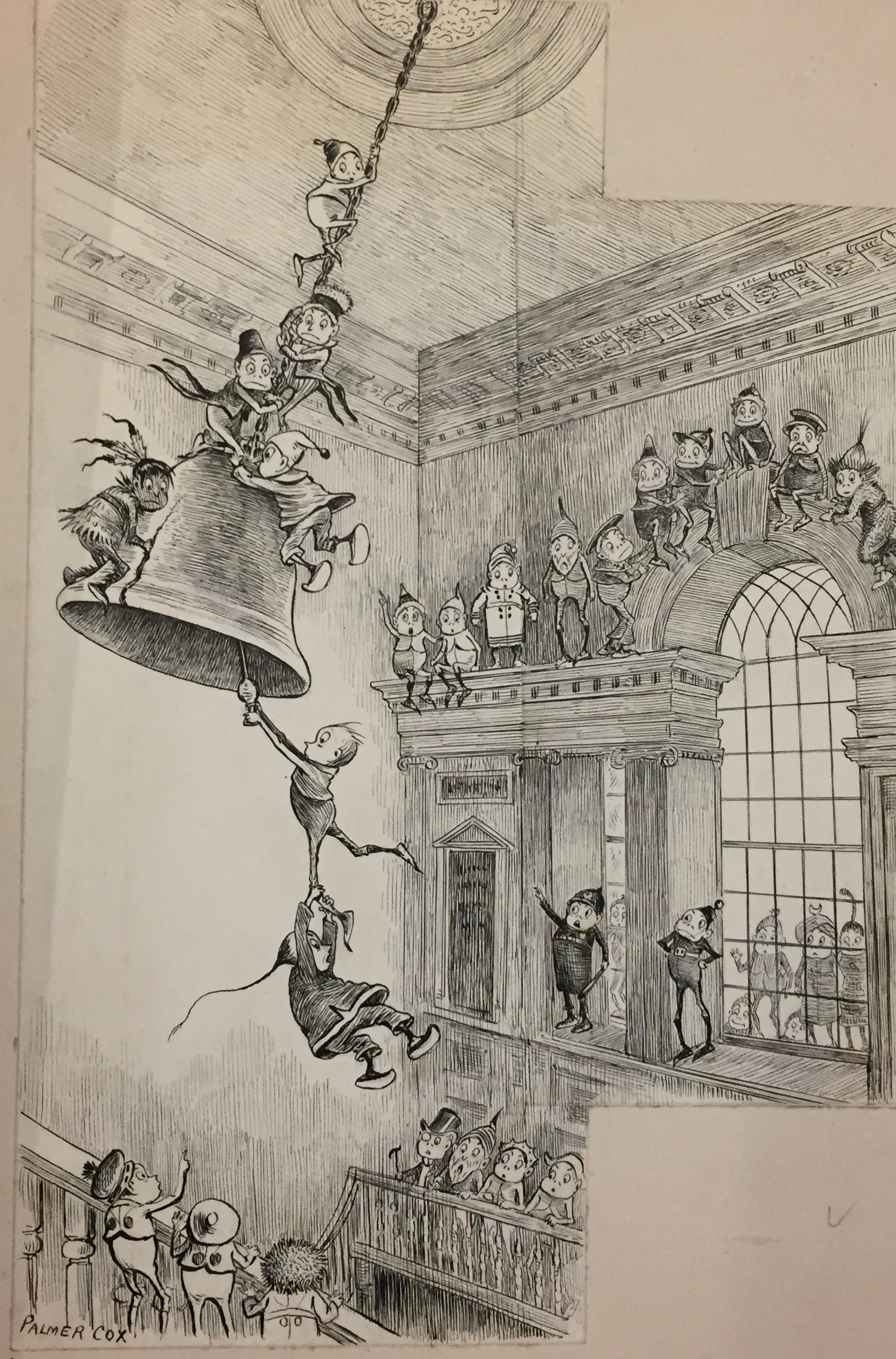 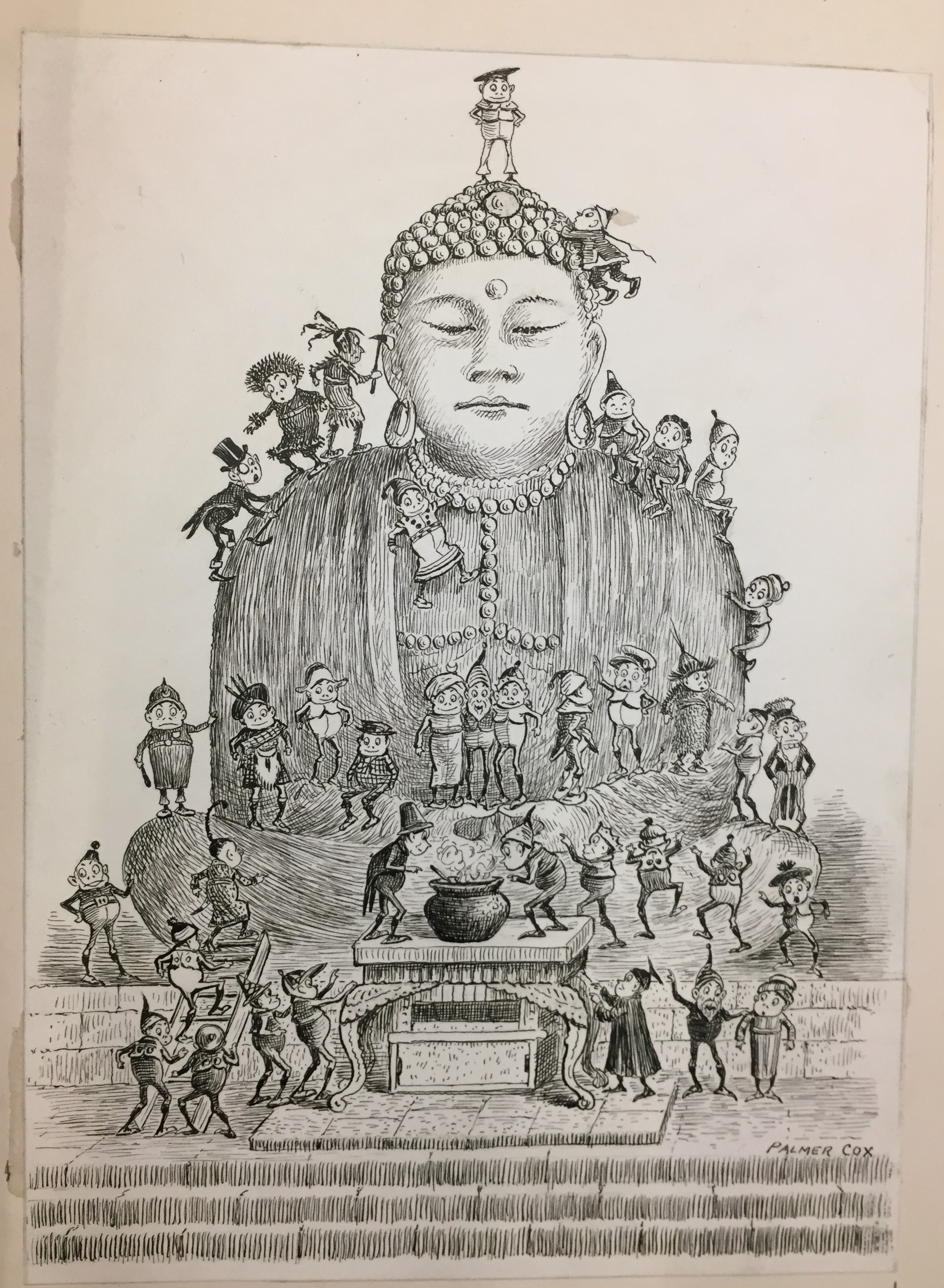 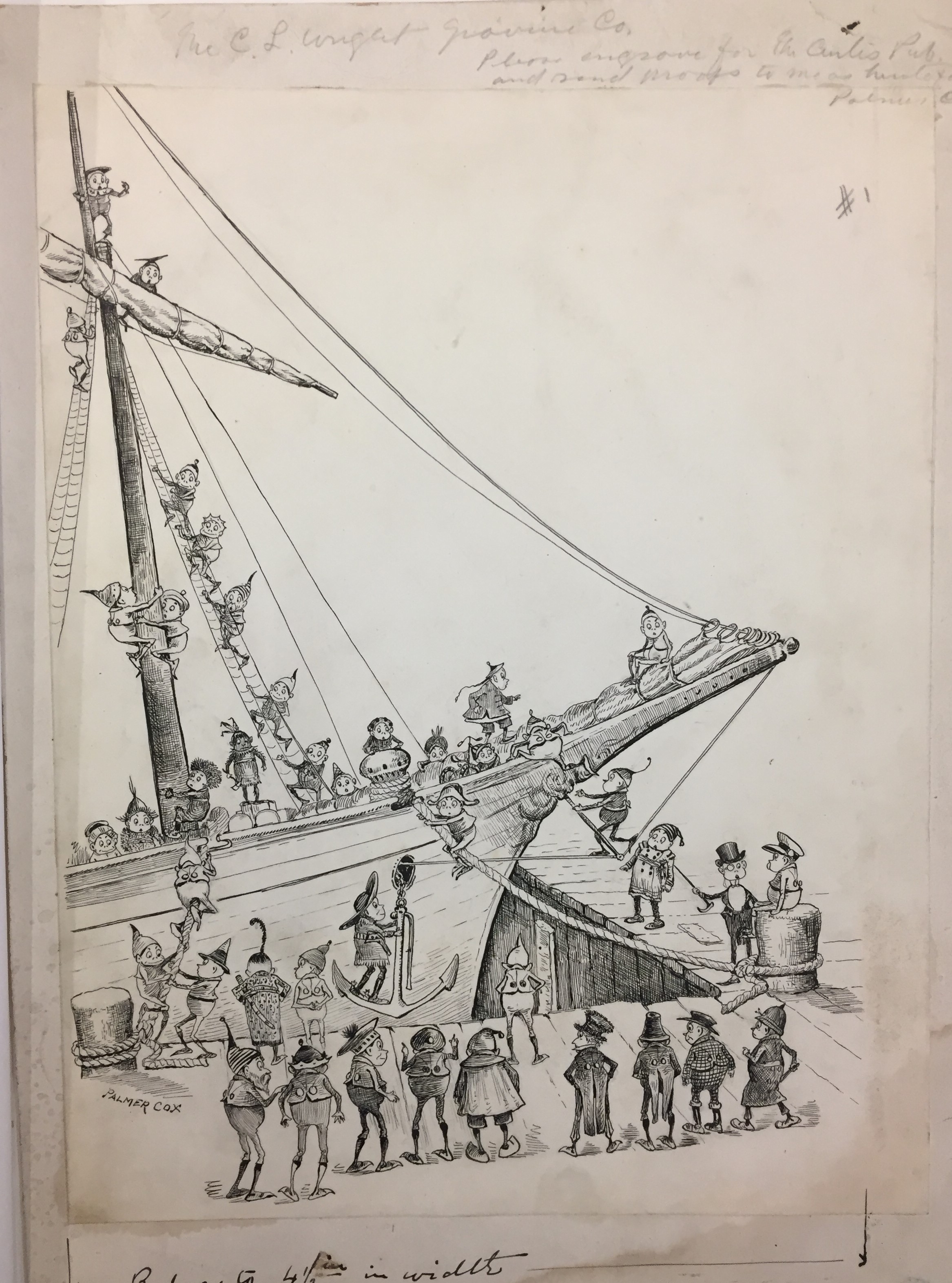 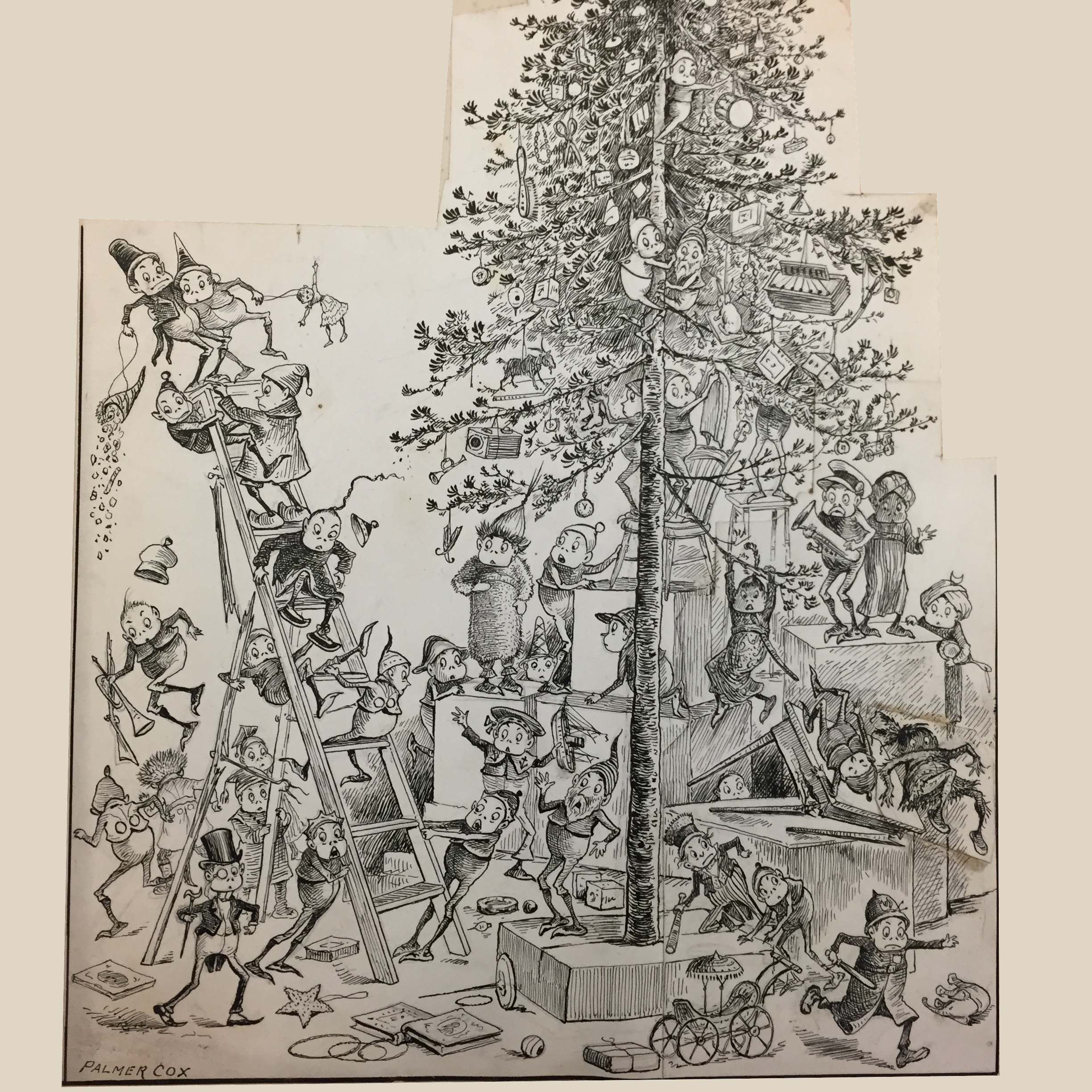 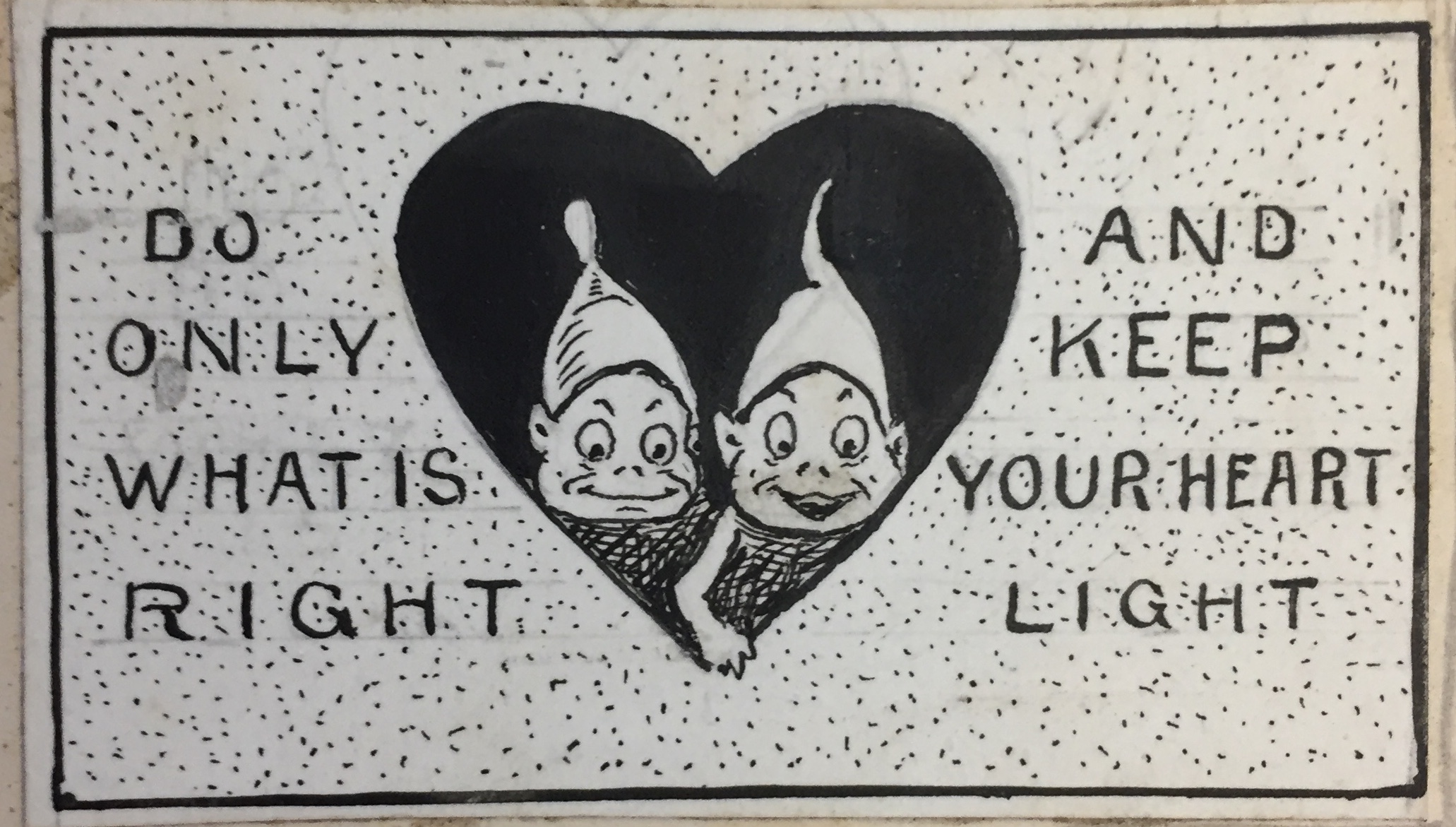 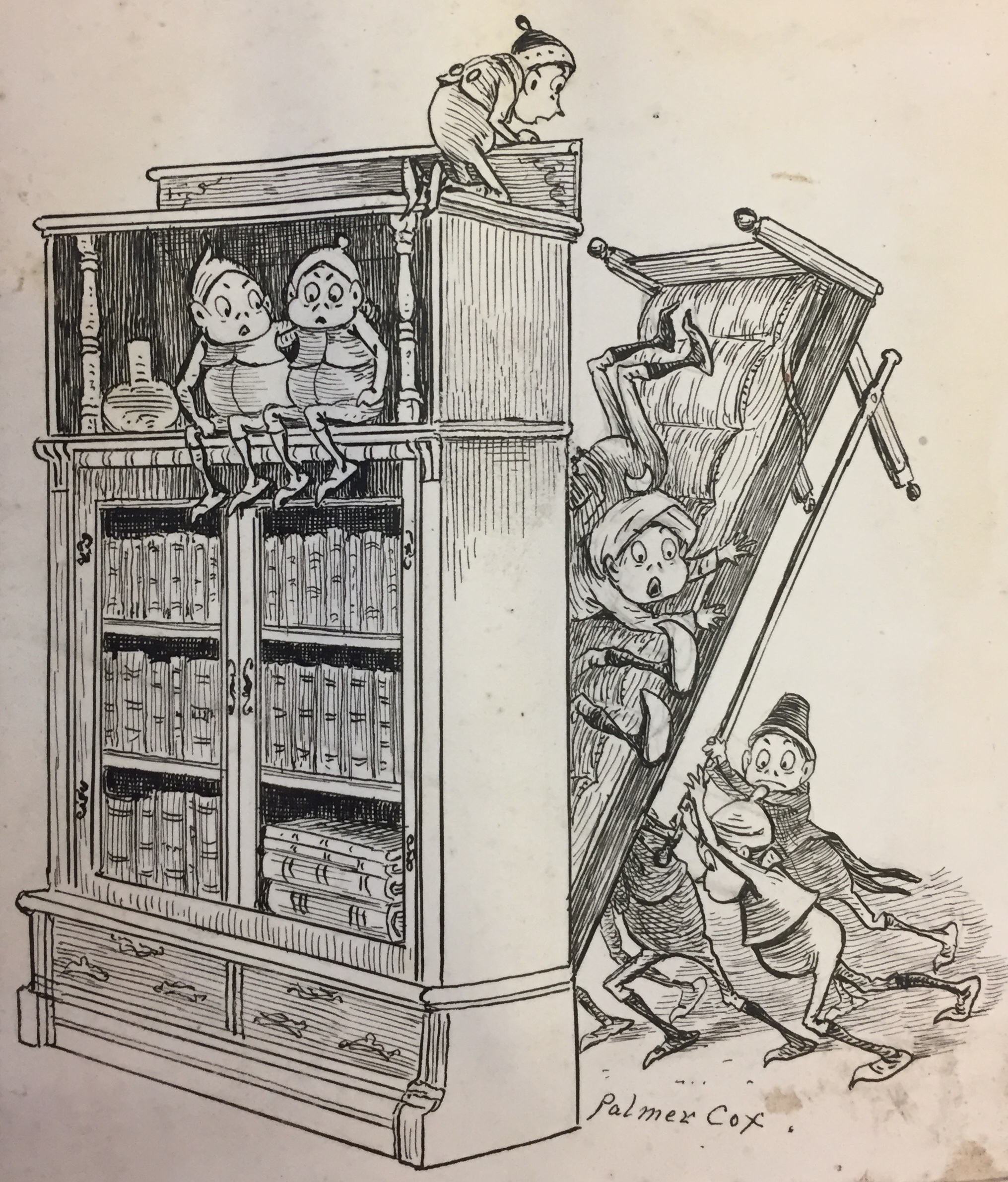 I was walking around campus the other week when I saw the two enormous Christmas trees in the front entrance of the Arts building. Similarly, to the Montreal store’s Christmas windows, having these trees on campus means that Christmas is just around the corner and so are holidays!

Christmas and Holidays remind me family gatherings and the numerous tales my parents used to tell me on Christmas Eve. Christmas spirits, elves, evil gnomes stealing Christmas present and others, played a big role in creating the magical atmosphere of that special day.

There are plenty of treasures in the Archives and Rare Books collections, all with stories to tell, and the brownies’ legend is one of them. 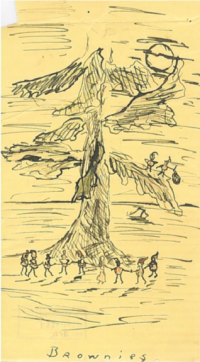 It all started with a sketch from Lady Margaret Dawson, the wife of Sir William Dawson, former McGill principal from 1855 to 1883 and mother of George Mercer Dawson, eminent geologist and member of the Geological Survey of Canada, poet, and talented drawer. While I was researching in the George Mercer Dawson’s paper, I came upon a small drawing showing tiny individuals dancing around a tree with the annotation ‘Brownies’. George’s mother was often writing letters to her son and during the Christmas period, she wished to remind him of his childhood where the Brownies were a common legend for kids in the 1860-70s. 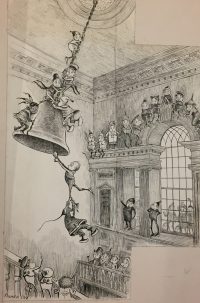 Even though my childhood has been full of tales, magical creatures, and legends, I have never heard of these little characters. I did some researches and found out that the so-called “Brownies” were little household spirits, really popular in the Britannic folklore. Legend is that each family possesses a personal brownie who, when the house is asleep, carries out the household tasks such as cleaning, tidying, polishing the floor, etc. Brownies are seen as nice and helpful spirits, but they can get mad quickly and become ‘Boggarts’, the evil version of the brownies. Boggarts are evil/nasty little elves who are always messing around and break everything in their path. 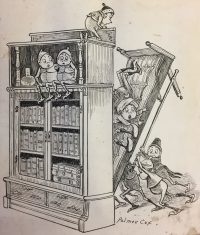 If this story doesn’t ring a bell to you, perhaps, you heard of the brownies in a different context, such as the name of the Girl guide section.

Robert Baden Powell, founder of the worldwide scouts’ movement had troubles with a section of the Canadian girls’ guides, the 7 to 10 year-old girls. Originally called ‘Rosebuds’ the young girls didn’t really like their name and asked Baden Powell to change it for something they felt more related to. At that time, the legend of the brownies, from the children’s book ‘The Brownies’ by Juliana Horatia Ewing was a common story told to children. Inspired by these characters, the name of Rosebuds was changed to Brownies.

Such as the brownies, the girls’ guides made the promise of doing good deeds, helping people at home and being kind.

The brownies became very popular two decades later, with Palmer Cox’s books and illustrations telling the funny and extravagant stories of the nice spirits. Some of its illustrations are part of the Rare Books collection, such as Brownies at home, Brownies Around the World and Brownies through the Union. 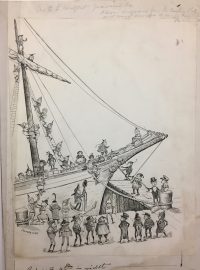 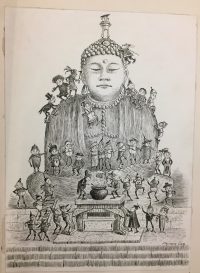 The name of the brownies remains today, and although the legends around the brownies are not as common as before, many modern movies and books’ characters are inspired and based on their stories. The most popular example in modern fantasy is Dobby, the house-elf following Harry Potter on his adventures. As a nice reference to the Britannic folklore, J.K. Rowling includes brownies and boggarts several times in her fantastic universe.

Now you may have guessed that each character of this post shares somewhat the same story of the little house elves, the playful brownies!  I hope this blog post reminded you of Christmas spirit as it did to me, and maybe bring some childhood memories back!

1 Comment on “Christmas riddle: What is the link between an eminent geologist, Christmas spirits, the founder of the Scouts and J.K. Rowling?”