Home › From the Stacks › Boat stories

By: Frédéric Giuliano March 1, 2019 From the Stacks

In the late 1940s, McGill received an extensive set of ships’ badges from the Royal Navy. These were to serve as decoration on the walls of the swimming pool of the newly erected Memorial Hall. The British Admiralty had already coordinated with Mrs.“Dolly” McEuen for the donation of Royal Navy badges. Her husband, Charles Stuart McEuen, was a McGill Alumni (M.D. 1920) and a Research Associate in Biochemistry at McGill from 1933-1940. He then decided to contribute to the war effort by being a surgeon commander for the Royal Canadian Naval Volunteer Reserve. Mrs. McEuen then dedicated her time in Halifax to the establishment of the Ajax Club and the Ajax Hospitality Headquarters which served as entertaining and accommodating institutions for British soldiers wanting to make the most of life in Canada. The initial set of badges was sponsored by the 60,000$ surplus donations from Mrs. McEuen’s associations to establish the Ajax Hospitality Memorial Scholarships for young officers of the Royal Navy to attend McGill University post-WWII. In 1950, a semi-last minute addendum was coordinated with efforts from Principal Frank Cyril James, Mrs. McEuen and the Department of National Defence to add wood mounted badges of the Royal Canadian Navy as well. Unfortunately, this amount of weight would cause serious architectural issues to the swimming pool walls so the badges were installed in the gymnasium instead, and remained on display, we assume, until the early 1970s. The badges were transferred to the McGill University Archive in 2007 (acc. 0000-0184 RG 10 C18 f.1362 “SHIPS’ BADGES”). 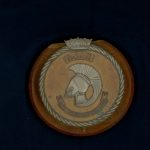 This badge was specially made in Montreal for the War Memorial in honour of Mrs. McEuen’s contribution to McGill University. It was stolen within its first few months on display in the gymnasium. Urging for its return, this story was covered in the McGill Daily (vol. 40, no.74, 12 February 1951)

According to a Haida legend, the infamous thunderbird can cause thunder by a flap 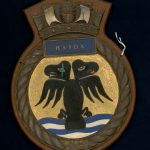 of its wings. A similar racket was to be heard by German troops who dared face the HMCS Haida’s raining bullets, and thundering guns in battle. It was commissioned in 1943 and built in the UK. The Haida is known as the “Fightingest Ship in the Royal Canada Navy” for sinking the most enemy ships. This tribal class destroyer was an active convoy escort and participated in crucial 1944 battles in the English Channel and in Normandy. The ship was decommissioned in the 1960s and is now a Naval Museum in Hamilton, ON. 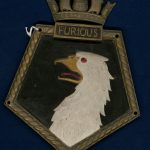 The HMS Furious was an aircraft carrier which escorted the very first Canadian deployment in December 1939 alongside other Royal Navy battleships. The TC1 convoy from Halifax was carrying thousands of Canadian troops heading to Europe. For the rest of the war, the HMS Furious was mostly stationed in the northern seas of Norway and the western part of the Mediterranean at Gibraltar. It is one of the man ships that successfully participated in both World Wars and the sixth ship to bear that name in the history of the Royal Navy. 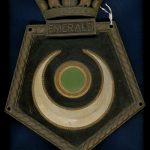 As the main part of the escort force stationed at Halifax, the HMS Emerald was one of many battlecruisers that transported British gold bullions from Plymouth to Halifax for safe keep during the War. After a successful transfer on October 17th 1939, the Emerald was to be part of the Atlantic convoy back to the UK. It was then nominated for further transfer of gold bullions in November that year and in June 1940. The cruiser was also part of the first Canadian convoy escort in December 1939. 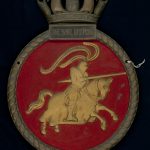 The HMS Resolution was the sixteenth ship to bear that name with a history in the Royal Navy going back to 1652. It was one of the many ships on convoy duty in the early months of the war that was tasked with escorting the first Canadian troops and transporting gold to Halifax. Indeed, Britain would be in need of such capital overseas for the payment of raw material and armaments. Around £40M were sent to the US which would then be embarked in smaller sums aboard battlecruisers in Portland, ME. Heavy boxes of gold were then delivered to Halifax in October 1939. It was then off-loaded to be transported to Ottawa. For the rest of the war, the HMS Resolution was part of the Channel Force protecting convoys and was mostly stationed in the North Sea and Norway where she saw the most action in 1940. 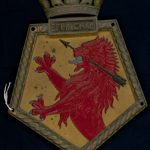 Similarly to the HMS Emerald and Resolution, the HMS Effingham transported gold bullions from the Us to Canada in November 1939. However, the ship had a relatively brief war service. Indeed, when stationed in Norway, during a convoy transport, the HMS Effingham collided with a rock unmarked by the navigator. It ran aground at 23 knots (42.6 kph). The onboard troops were transferred to accompanying ships and its wreckage was then sunk by a torpedo. 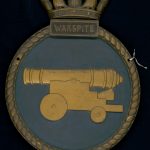 This motto genuinely represents the spirit of the HMS Warspite as it gained the most battle honours in all of the Royal Navy History. She was nickname is ‘the Grand Old Lady” as it participated in both World Wars. It was commissioned in the 1910s when Winston Churchill, First Lord of the Admiralty at the time, saw it launched. Three decades late, she would still prove to be indispensable to the Royal Navy. After a short stint in Halifax in November 1939, Warspite returned to the UK and provided cover for the first Canadian troops’ arrival. She traveled the world until her last WWII battle in November 1944. 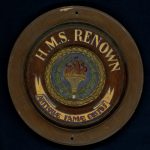 The HMS Renown was one of the many battlecruisers that successfully participated in both World Wars. During her many interventions around the world, which needed much refitting, this battlecruiser saw her fair share of ‘renowned’ characters. In 1927, she escorted the Duke of York for his royal visit to Canada. He would later board the ship with President Truman in August 1945 this time as His Majesty King George VI. The HMS Renown was also escorted Winston Churchill in and out of Canada for the Quadrant Conference where the secretive Quebec Agreement on nuclear weapons was signed alongside President Roosevelt. 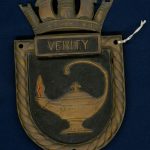 One of the very first challenges for this destroyer was assisting the Dunkirk evacuation. Even after coming under heavy fire, the HMS Verity was able to safely return 367 troops to Dover beach during Operation Dynamo. For the rest of the war, she was mainly stationed in the Atlantic to escort and defend convoys. Although this ship may not have seen the fiercest action in battle, the truth is that she was one of the many ‘unsung heroes’ of the war. Indeed, it is important to note that the vast majority of convoys sailed the Atlantic unscathed due to these escort ships’ diligence. The HMS verity might not have been Aladdin’s genie lamp, but a safe passage during the war was definitely every soldiers’ wish. 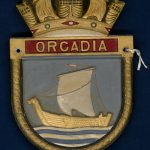 The badge for the HMS Orcadia was one of the first that caught our attention. Contrary to some others, it retains most of its original shine. The badge itself encapsulates the Nordic and Viking heritage of the Orkney Islands in the North of Scotland. Historically, Orcadians were known as good seamen and provided manpower to the Hudson’s Bay Company in the Canadian North West as well as the Royal Navy in the 18th and 19th centuries. The islands played an essential part in WWII as they housed one of the main refit station and shelter in Scapa Flow. The HMS Orcadia participated in the post-war minefields sweep of the North Sea and Atlantic. 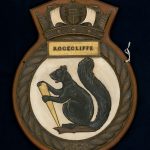 The HMCS Rockcliffe operated in some of the late war escort duties to Halifax as well as the tense V – E day German U-889 surrender to the Canadian Navy near Newfoundland. Rockcliffe is a village near Ottawa is known for its abundance of wildflowers and small animals, which is represented in the ship’s badge by the black squirrel.  It is interesting that the squirrel would be used as an emblem of a navy ship when we know them here at McGill as the friendliest of animals.

We sincerely hope we sparked your interest and McGill University Archives wants to share this discovery with you! This is why we are currently digitizing the 63 ship badges and soon, you will be able to see them on the McGill Archival Collection Catalogue.