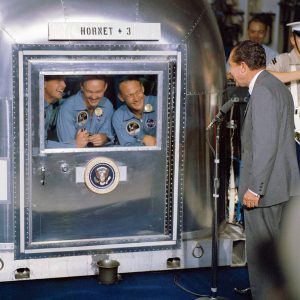 President Richard Nixon was aboard the recovery ship to greet the astronauts. Confined to the Mobile Quarantine Facility (MQF) are (left to right) Neil A. Armstrong, Michael Collins, and Edwin E. Aldrin Jr. / NASA S69-21365

50 years ago, the Apollo 11 crew completed their mission. The primary objective of Apollo 11 was to perform a crewed lunar landing and return to Earth. It would have taken 8 years for NASA to complete this goal set by President John F. Kennedy, on May 25, 1961.

If you have read about the Apollo 11 mission, you know that the most difficult part of the mission wasn’t to send a man on the moon, but really to bring the crew back to Earth. Perhaps, that gives a little more value to those 3 artifacts that are kept by McGill University Archives and who did make the trip to outer space. 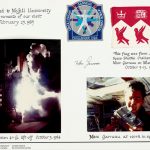 On February 15, 1985, Marc Garneau, the first Canadian astronaut, gave to McGill University a little souvenir of his mission in space which included a McGill Martlet Flag that was brought on the space shuttle Challenger. 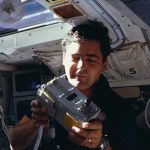 Marc Garneau displays a Canadian made Sunphotometer, part of a package of experiments which he is concentrating on during this mission / 1984-10-08 – NASA 41g-09-004

STS-41-G was a historic mission in many ways, it was the first shuttle mission to carry a crew of seven, including the first crew with two women, the first Australian-born person to journey into space and the first Canadian astronaut, Marc Garneau. More specifically, Garneau’s mission was to conduct 10 experiments in three main categories: space technology, space science, and life sciences. The space technology experiments involve two areas: important development tests for the NRCC Space Vision System experiment to be flown on a mission in early 1986 and tests to determine the effect of exposure to space on different advanced composite materials.

201 orbits around the Earth 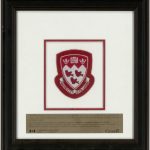 Space Shuttle Endeavour’s STS-118 mission was the 22nd shuttle flight to the International Space Station. From August 8 to 21, 2007 the mission was continued space station construction by delivering a third starboard truss segment. 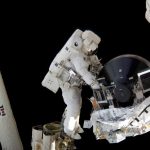 While anchored to the foot restraint on the Canadarm2, astronaut Dave Williams participates in a  6-hours, 28-minutes spacewalk. Williams installed a new gyroscope that is one of four that are used to control the station’s attitude in orbit. / NASA s118e09844

Canada’s contribution during this mission was once again crucial. During the mission, Dave Williams will set a Canadian record by spending over 19 hours outside the space station during three scheduled spacewalks. In addition, Canadian-made robotics and sensor technologies that will help ensure the success of the mission and the safety of the shuttle and crew.

As a proud McGill Alumni, Dave Williams brought with him during this mission a McGill University crest. During the 13 days that lasted the mission, this crest completed 201 orbits around the Earth and traveled 8.53 million kilometers in space. 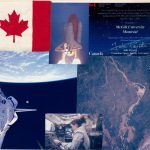 On April 22, 2001, the Canadian astronaut Chris Hadfield ventured out from Space Shuttle Endeavour and into the vacuum of space to attach Canadarm2 to the Destiny Module of the International Space Station (ISS). This marked the first spacewalk for a Canadian, a milestone in Canadian space exploration history. It was also the debut of Canada’s iconic second-generation robotic technology, Canadarm2. Since its activation in 2001, the arm has proven to be an invaluable addition to the ISS, assembling all subsequent elements of the Station. 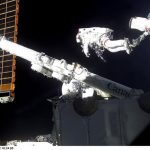 Astronaut Chris A. Hadfield, STS-100 mission specialist stands on one Canadian-built robot arm to work with another one. Called Canadarm2, the newest addition to the ISS / NASA S100E5239

It was during an official visit of the Canadian astronaut and McGill Alumni, Julie Payette, that this gift (left photo) was presented to the university. This small Canadian flag was flown aboard Space Shuttle Endeavour completing 187 orbits of the Earth and traveled 7.9 million kilometers during mission STS-100 with Colonel Chris Hadfield.

For breathtaking images and content, you can fly to the Nasa’s Image and Video Library