Home › From the Stacks › It’s a Slam Dunk: Inspiring a Nation of Youth

It’s a Slam Dunk: Inspiring a Nation of Youth

By: Frédéric Giuliano December 21, 2018 From the Stacks

How does a building with “unadorned simplicity of its exterior, the forbidding gloom of its interior, the patched condition of its flooring and the holey state of its roof” inspire a nation of youth? (Old McGill Yearbooks, 1899) 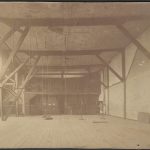 James Naismith (BA 1887) invented a good clean game to teach the youth confidence and to become good citizens.  He knew that the game would need to be skillful and lively, team-orientated, and move at a fast pace.  On December 21, 1891, the first basketball game was played in Springfield, Massachusetts.  Basketball quickly became popular and today is the most played sport among young people.

Inside the walls of the McGill University Gymnasium, James Naismith showed an avid interest in athletics.  Shortly after beginning his education at McGill in 1883, Naismith joined the Athletics Club.  He took part in ground gymnastics and played football rugby during his studies.  Athletics formed an important part of his education at McGill, and in 1886 he was elected to the Executive Committee of the McGill University Athletics Association in the position of Clerk, and three years later, he became an instructor of gymnastics.  Given his prowess and excellence in gymnastics, Naismith was the recipient of the coveted 1885 Silver Wicksteed and the 1887 Gold Wicksteed medals.

From 1883 to 1890, when he left for Springfield College in Massachusetts, Naismith’s love of athletics and sports inspired all he met.  Graduates from the International YMCA Training Program in Springfield, spread the game wherever they went.  One such graduate was Archibald Lyman who came to St. Stephen, New Brunswick and introduced basketball in the fall of 1892.  The following year, Lyman also demonstrated the game in Hamilton, Ontario where it made rapid progress to become one of the largest basketball centres in Canada.  Forty-five years later, basketball made its inaugural medal game at the Summer Olympics in Berlin, Germany. Naismith was in attendance for the first match in which he threw the tip-off ball.

Sports has symbolic meaning for a nation, and basketball is no exception.  The grace, agility and strategy of the game has come to inspire millions.  When first invented, the game could be played between five and nine players on a team.  It was played “strictly [by] passing the ball from man to man” with the utmost importance of getting an uncovered position.  Unlike today’s game, the original game when played on a field, a player “may run with the ball if he continually throws it above his head and catches it again.”  The advent of the forward pass, “[b]asketball has become footballized and football has become basketballized.”  With the invention of basketball, Dr. Naismith became a benefactor of youth and inspired millions.