The Recipes Project : Library Chat at the Osler

Welcome to a guest edition of Library Matters! This week’s blog is brought to you by Dr. Sarah Kernan of The Recipes Project. Dr. Kernan is an independent culinary historian who holds a Ph.D. in medieval history from The Ohio State University. The Recipes Project is a collaborative effort by an international group of scholars whose interests lie in the history of recipes, broadly conceived.

Welcome to the latest Around the Table and return to the Recipes Project Library Chat! Today we travel to the Osler Library of the History of Medicine at McGill University in Montreal. I am delighted to speak with Dr. Mary Yearl, Head Librarian at Osler Library.

Q: The McGill Library has many items of interest to our readership, particularly in the Osler Library of the History of Medicine and the Cookbook and Menu Collection housed in Rare Books and Special Collections. Could you provide a brief overview of the library’s holdings and research strengths? 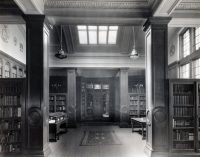 The Osler Library was designed by Percy Nobbs to house Sir William Osler’s books and his remains. Here one sees the library in the Strathcona Medical Building, where it opened in 1929. This room was reassembled in its current location in the McIntyre Medical Building in the mid-1960s.

The nucleus of the Osler Library of the History of Medicine is the collection of nearly 8,000 titles left to the McGill Medical Faculty by Sir William Osler when he died in December 1919. The holdings are mainly, but not exclusively, medical. The library is also home to editions of foundational works in the history of science and to a number of literary and theological books collected by Osler. The majority of our items are printed, but we also have sizeable collections of archival materials, artifacts, and some pieces of artwork. 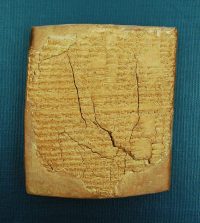 B.O. 53, Assyrian Medical Tablet. Containing such advice as, “‘the emerald plant’ in best beer thou shalt give him to drink,” This Assyrian medical tablet from ca. 700 B.C.E. provides recipes to treat an unnamed eye disease.

Osler’s own collecting with respect to recipes favoured works from England written or published in the 16th and 17th centuries. That said, there are also works in French, German, and Latin, and the earliest item is an 8th-century BCE Assyrian tablet on various treatments for an unspecified eye disease. Of the items that have been added more recently, the 19th and 20th centuries are well represented.

The real wealth of recipe-related items at McGill can be found outside of the Osler, within the Library’s division of Rare Books and Special Collections. The Cookbook and Menu Collection was established in the late 1960s and consists of over 3,800 titles. It is composed primarily of Canadian, American and British material. The bulk of the collection is from the twentieth century, though there are significant nineteenth-century holdings including a long run of editions and revisions of Mrs. Beaton’s Book of Household Management. In addition, there are some eighteenth-century books.

The collection includes a considerable number of ephemeral items containing recipes and produced by flour mills, sugar refiners and other food manufacturers. Cookbooks created by church organizations, women’s clubs, and other community groups form another significant part of the collection. In addition, there are a number of books devoted to home economics. Also within the Rare Books and Special Collections division is the recently-acquired Doncaster Recipes Collection, consisting of culinary and medicinal recipes mainly from the late-eighteenth through the first half of the nineteenth century.

Q: Can you highlight a few of your favorite recipes-related items? 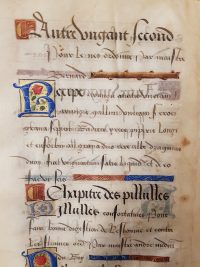 Several of the recipes in this manuscript refer to a “Master Bernard,” whose identity is but one of many questions we hope to answer through scholarly research. Note the combination of fine artistic detail and practical medical information.

Without hesitation, our current favourite item is manuscript of medicinal recipes from ca. 1515, recently acquired with an eye towards honouring Sir William Osler as we commemorate the centenary of his death. We are in the early stages of planning a scholarly edition and are truly enthusiastic about the many directions we can go with this work. The work is marvellous aesthetically: it is a deluxe presentation copy with a velvet cover and fine illuminations, given by the Archbishop of Lyons François II de Rohan to his brother, Charles de Rohan-Gié. The manuscript bears clear signs of having been read, with marginal “nota” and the occasional “nota secretum” indicating that this work was not merely admired for its beauty, but was also appreciated for its contents.

Another interesting one is B.O. (Bibliotheca Osleriana) 7591, which in many ways is a standard late medieval recipe manuscript, a copy of John of Burgundy’s Practica phisicalia. This in itself is not remarkable, but in a blog post that appeared in the Osler Library’s former platform, De re medica, Patrick Outhwaite observed that B.O. 7591 had in common with Wellcome MS. 406 the removal of information about male sexuality.

Another local favourite is manuscript B.O. 7586, best known to us as “The Book of the Head,” which is the subject matter of the text bound with Nicholas of Lyra’s Postilla super librum Job. This 15th-century manuscript is part of a larger work that would have offered treatments for all sections of the body, but a deliberate choice was made in this case to include only recipes to treat ailments of the head.

Many of the less explored recipes come from daybooks, journals, and other sources of vernacular medicine. I was recently reminded of a short section on recipes that appears in a notebook kept by a woman from Ontario in the early years of the 20th century, which we recently acquired but have not 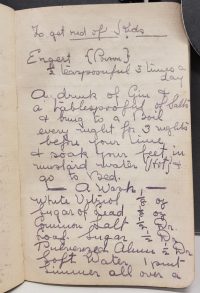 Margaret Parnell, Manuscript commonplace book. Ontario [various places], ca. 1908–1913. The abortifacient and contraceptive recipes recorded in this commonplace book from the early 20th century contain many ingredients that were either identified as poisons (ergot) or which are known as such (sugar of lead), and also includes the curious, “gun powder + whiskey + take freely.”

yet catalogued. “How to get rid of kids” is the start of a few pages of recipes on abortion and contraception. Fertility recipes are an important part of the history of medicinal recipes, and to see such a stark title is a somewhat ironic reminder of the utter humanity behind the pen. Despite the shock of the initial title, however, the recipes themselves are practical, if poisonous (e.g., a contraceptive douche that contains sugar of lead). Beyond these few pages, the commonplace book is as mundane (and interesting for this) as might be expected, also including household accounts, a list of books, and an inventory that includes a breast pump.

Other items we appreciate because they reflect our attempts to tell the history of medicine as practised locally. Some of our recipes come from patient notes. For instance, in a record book kept by Theodule Nepveu, who practised in a variety of towns around Quebec in the first half of the twentieth century, we find a “regime alimentaire” outlining permitted and prohibited foods for those with colitis. Nepveu’s record book is not spectacular in the way that the François II de Rohan illuminated gift is, but the information it contains is no less important. To start, one might examine a doctor’s comments about diet to draw conclusions about what foods were available, and which his patients were likely to have access to. Or, as with the commonplace book of the woman from Ontario, it is the ordinary practicality that makes the contents extraordinary.

Q: What tips can you offer to help users find collection items with recipes via your catalogue or finding aids? 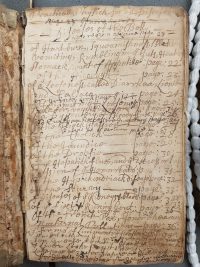 MS 251, Practicall Physick of Roger Lickbarrow, mid-18th century, contains medicinal remedies for a wide range of complaints. The contents are ordered by type of ailment. The page shown refers to “diseases of the belly” and has “French pox” as well as “nocturnal pollution” near the end. Other sections are devoted to “womens diseases” and “childrens diseases”.

This is not intended to be a trick question, but at the moment it rather feels like one. We in the process of adapting to the new WorldCat Discovery catalogue, but those of us who work with rare materials are still waiting for certain search features from our old system to be made available in the new one. For those who wish to search the original Osler catalogue, the Bibliotheca Osleriana is easily found online. For archival sources, there is now an integrated archival catalogue, through which one can search all archival holdings at McGill. Another place to find recipe-related items is in the McGill Library’s collections within the Internet Archive, discussed below. With regard to searching those resources, though, it is a good idea to click “search text contents” rather than only searching the metadata.

Even though most of our material is catalogued, we would advise anyone with questions to reach out to us (osler_[dot]_library_[at]_mcgill_[dot]_ca) to see if there might be more.

Q: Does the McGill Library offer any digital resources to off-site researchers?

We have a small number of items that have been digitized, but enough that we have created an Osler Library collection within the Internet Archive.

We are making an effort to increase the digital resources available to off-site researchers. In addition to highlighting items to prioritize for digitization, we are figuring out the best workflow for digitizing items straight from cataloguing where feasible. Finally, we do digitize materials on demand. There will be some delay depending upon the queue in the digitization lab, but we regard user requests as one way of making our materials available to a wider audience.

Q: Does McGill offer any fellowships or travel grants for researchers who want to go to Montreal to use your materials?

The Osler Library offers three research grants and one artist residency. For those seeking to use materials within Rare Books and Special Collections, there are three available grants.

Thanks, Mary, for chatting with me! If you’d like to see your library or archive collection featured on the Around the Table Library Chat, please email Sarah Kernan.