The Visual Art Collection, with support funding from SSMU and the Dean of Libraries, installed a number of artworks in the McLennan-Redpath library over reading week. As we all eagerly await returning to campus, we can also look forward to appreciating these artworks in their new locations.

The main floor of the McLennan-Redpath library is the new home to two tapestries. Practically, draped tapestries are used to reduce drafts and soften acoustics, but they also are important form of art production, particularly in the Medieval and Renaissance periods. In the 1960s, there was a resurgence of woven wall hangings in Western public interiors. This revival saw textiles as “a necessary partner to burgeoning architect-designed city buildings, mitigating the severity of concrete and glass with tactile warmth and color.”[1] 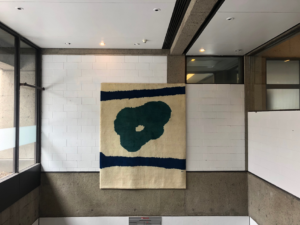 The library’s main entrance now boasts a large tapestry by Robert Motherwell (1915-1991). Before becoming an artist, Motherwell was a scholar. After completing philosophy degrees at Stanford and Harvard, he enrolled in an Art History graduate program at Columbia in New York. It was here, in 1940, that he became interested in the Surrealists, a group of European artists who explored the possibilities of automatism – essentially free association. This would become a guiding principle for Motherwell, relying purely on his unconscious and his materials to invent new forms and modes of representation.

As one of the founding artists of the influential New York School of Abstract Expressionists, Motherwell is a significant artist of the twentieth century. Coined by a group of American artists and critics after WWII, this art movement champions the act of art making as self-expression and discovery. Generally, these artists became interested in form, intention, gesture, colour, and purity of their mediums.

McGill’s Motherwell is titled Blue and Green, reiterating the importance of colour in his work (Fig. 1). On a neutral beige background two dark blue bands horizontally frame the top and bottom of the large rectangle tapestry. In the center of the composition is an organic circular shape. This dark green form has a beige center, giving the shape a cut-out quality on top of the predominantly beige background. The design of this textile was commissioned by a commercial tapestry company, Modern Masters Tapestry, Inc.. The owners, Charles and Regina Slatkin (McGill class of 1929) of Slatkin Galleries in New York, invited American artists to adapt their aesthetics to this woven medium in 1965. Motherwell was an apprehensive participant because his art practice was always informed by the qualities of his materials. The commission contract confirmed that, “the artist agrees to consult with the Slatkin Galleries in connection with any samples or models of both weaving and color dyes”.2 After some negotiations, Motherwell accepted Slatkin’s invitation to edition his original design. Some formal qualities of this work can be recognized in his other drawings, paintings, and collages. Specifically, a composition divided by bold lines, expanses of negative space, and a central gestural shape. Motherwell’s commitment to the inherent qualities of his materials is also evident in Blue and Green. The uneven blue bands and the green flower-like shape resist the straight lines of the weave. The absence of any clean lines heightens the soft texture of the textile.

Motherwell once wrote, “In choosing to become an artist… one discovers who one is, more exactly invents oneself.”[2]This bright, fresh work brings lightness to this busy space in the library, which many pass on their way to and from serious study. Motherwell’s striking artwork and confident approach is a reminder of the importance of continual self-discovery. 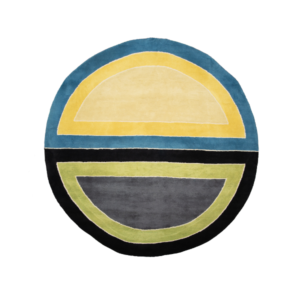 A large circular tapestry by Frank Stella (1932-) now hangs above the hallway that connects McLennan to Redpath. Stella, like Motherwell, is an important modernist artist associated with the Abstract Expressionists. After completing a degree in history from Princeton, he moved to New York City where he would meet some of the most influential figures in the American art world. Stella was only 23 years old when he was included in a group exhibition at MoMA in 1959 titled Sixteen Americans.

Stella’s early work unabashedly explored removing expression from abstraction and invited the viewer think only of the surface of the artwork. This fixation with the purity of painting led Stella, and other artists, to develop the aesthetics of Minimalism. His famous quote, “What you see, is what you see”, would be become an unofficial slogan of this art movement. [3]

In the late sixties, Stella pushed his fascination with form to include color and geometry. McGill’s Sinjerli Variations, which is a unique tapestry edition commissioned by Modern Masters Tapestries, Inc. in 1968, belongs to the artist’s Protractor Series (Fig. 2). Challenging the presentational format of paintings, he created large circle, semi-circle, and polygon canvases. His characteristic stripes follow the curves and angles of these shapes to emphasize their non-rectangle forms. Many works in this series are named after ancient citadels in the Middle-East. The concentric fortified walls had inspired Stella on a visit to this area in the 1960s.[4] 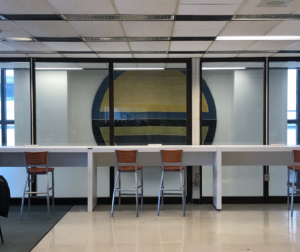 His compositions are designed to use the interplay of colors for optical illusions, which require the viewer to flip from a three-dimensional illusion to the two-dimensional reality of the canvas. For example, the color organization of Sinjerli Variations gives the impression that two halves of the same circle are different in size and weight. The tapestry is divided across the center and a blue thick outline traces the upper edge of the diameter and arch of the circle. Two yellow shapes echo this outline and fit inside the blue. The same pattern is repeated below, but with black, green, and grey hues. This darker palette anchors the lower half with density. In contrast, the two similar hues of bright yellow in the upper half blend together to emit an expansive lightness.

Sinjerli Variations can now be viewed from two vantage points; walking through the bridge from Redpath to McLennan and from the mezzanine of the second-floor study spaces in Redpath (Fig. 3). Both viewpoints allow us to engage with Stella’s playful illusion in new ways. While the artist maintains that, “what you see, is what you see”, the installation of McGill’s Stella tapestry insists that what you see is always relative from where you see.