Home › From the Stacks › DRAW needs you!

Looking for something to do while you’re self-isolating and social-distancing? Would you like to contribute to weather, climate science, and history? Come help us transcribe weather records from the past on DRAW! You can join a community of citizen scientists who are contributing to the understanding of historical weather patterns and building better knowledge of our climate. Join us today to begin transcribing handwritten weather observations into computer-crunchable data. 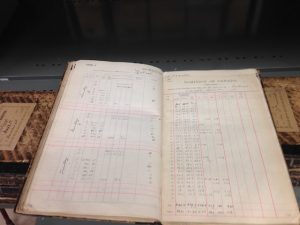 DRAW (Data Rescue: Archival and Weather) is an interdisciplinary project involving researchers and students from across McGill in the Faculty of Science, Arts and from the Library and Archives. The aim of the initiative is to make the meteorological observations of the McGill Observatory, founded in 1863 by Dr. Charles Smallwood, digitally available for scientific analysis by means of a citizen science web platform. At the same time, we wish to preserve the historical context and archival integrity of the collection.

The McGill Observatory collection covers over a century of observations, recorded as frequently as eight times a day with up to 40 or more individual elements recorded at each observing time. The collection comprises hundreds of register logbooks with tens of thousands of pages, containing millions of observations. The registers were initially microfilmed in the 1970s, and digital images captured from the microfilms. Methods and protocols for cataloguing both the paper and digital image files were devised and implemented, included filename and other metadata standards for ensuring traceability and transparency of the data at all stages. 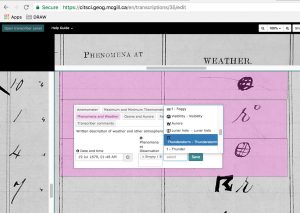 Given the enormity of the task, and the interest of the researchers in public outreach and citizen science, transcribing the meteorological information by engaging the Montreal public via citizen science was envisioned as a key part of the project from the outset. This influenced several project design decisions. A web app was designed to enable transcription directly from the digital images of the logbooks to a back-end database linked to the website user interface, avoiding intermediary steps such as spreadsheets.

Students from McGill’s Schools of the Environment and Information Studies have been extensively involved in DRAW since its inception in 2015, preparing, scanning and cataloguing image files, and testing the web app to incorporate user feedback. A student project from December 2017 reported 96% accuracy on DRAW’s citizen science transcribed data. DRAW was also the basis of part of a course module at Dawson College on the connections between historical climate and social science research in the spring semester of 2018. We are currently working on making the course module accessible online and on extending the scope to other courses and to high schools.

We are now in the launch phase of DRAW, as we explain the DRAW project and appeal for volunteer transcribers (citizen scientists) through traditional and social media. Further plans include community outreach in museums, community libraries and schools.

Plans for future research include analyzing citizen science participation, motivation and accuracy, evaluating the durability and flexibility of the database and app design, considering how it could be applied to other archival datasets to make them more accessible for research and available to the public, testing methods of validating the data, and evaluating historical aspects of climate change in Montreal.

Interested in helping out? Get started with DRAW today: https://citsci.geog.mcgill.ca.

By Rachel Black, Archivist at the Osler Library of the History of Medicine and Project Manager of the Data Rescue: Archives and Weather (DRAW) Project.