Home › From the Stacks › Call Me By My Name: The Nomenclature of Riddling Dinners

Call Me By My Name: The Nomenclature of Riddling Dinners 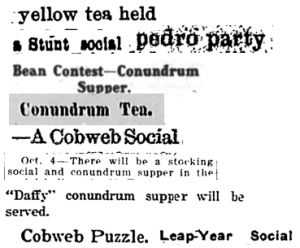 When we first discovered Conundrum Suppers – events in which guests order from menus written entirely in riddles – the name seemed oddly fitting. It described a meal served forth as  unsolved puzzles.

Funnily enough, it is because of the name “Conundrum Suppers” that it took The Riddle Project such a long time to uncover this tradition. Initially, we had used advanced search tools to discover Enigmatic Bills of Fare, related riddling events popularized in the 18th and early 19th centuries. However, by the end of the century, Enigmatic Bills of Fare were on the decline, eclipsed by this other form of meal-time riddle ways, known by an entirely different name. So, they never showed up in our original searches.

Even then the name “Conundrum Supper” was used in consistently. But as we discovered, these events were also occasionally referred to as “Conundrum Socials” or “Conundrum Teas.” Some omitted the “Conundrum” entirely! The Riddle Project has since found them under names as obscure and diverse as “Cobweb Social,” “Yellow Tea,” “Stock(ing) Social,” “Pedro Party,” “Bean Social” or “Bean Contest,” “Daffy Social,” and “Stunt Social.” How many more riddling dinners could be hiding in plain sight?

Find out more here. Do you have an undercover riddling dish to share? Reach out to @McGillLib, @McGillRoaar or email nathalie [dot] cooke@mcgill [dot] ca.